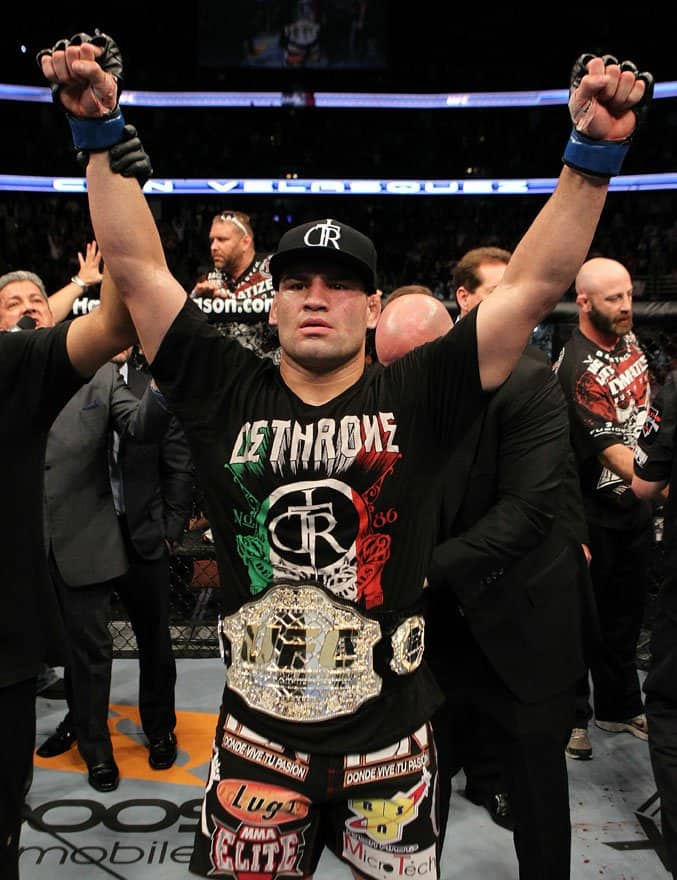 At 4 minutes and 12 seconds of the Heavyweight Championship bout headlining UFC 121, Cain Velasquez defeats Brock Lesnar. How memorable will this moment be for Cain, Brock, fans of the sport, and Mexicans everywhere. For Cain Velasquez it is the beginning of a new journey as reigning champion and a conclusion to a long road proving he had the skills, strength, and heart to take down the strongest man in the sport, Brock Lesnar. For Brock Lesnar, it is a humbling moment is a series of humbling moments over the past couple of years.

Brock Lesnar, the once loud and rude heavyweight champion has toned down his fan insulting antics after a long talk with Dana White and a longer battle with an unforeseen illness which almost ended his MMA carreer not to mention his life. The rebirth of Brock Lesnar showed a much more appreciative fighter that wanted fans to know he was dedicated to this sport and he was a champion people could love. It couldn’t have come at a better time now that he is no longer in that role and will surely need fan support to keep him in the top of the list of desired champions. He has the dedication and strength to take another title, but it is us that will have to want to have him there again.

Cain Velasquez, articulated after the championship win that this title belongs to the fans as well as him. Consistently, he has presented himself as a peoples’ fighter. He trains for himself as well as those that support him. He represents himself in a manner that emulates what we would all want out of a respectable champion. For him being Heavyweight Champion of arguably the toughest sanctioned sport is simply a role he was destined to fulfill.

Being a boxing fan for 20 plus years, Mexican fighters have always been known for their undeniable dedication to training and conditioning. Mexican fighters have been the backbone of the sport of boxing for more years than even I have been a fan. However, this dominance has always been in the bantam, featherweight, and similar weight classes. Their punch output and tenacity has made for a huge number of exciting fights and kept a sport with many ups and downs and biased scorecards afloat when the heavier weight divisions have struggled for contenders that also fill seats. So for a Mexican star to shine in a heavyweight division in a sport that require much much more depth in skill and range in training is wonderful for such a dedicated fan base.

Congrats to Cain for his accomplishment and to all that support him, be proud!

Be sure to shop in our store for tons of Cain Velasquez shirts as well as Brock Lesnar shirts. You can also get action figures or clothing from the companies these fighters represent, DeThrone clothing and Death Clutch clothing.