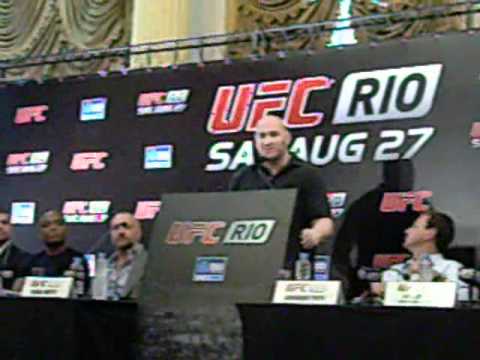 Royce Gracie may be making a return to the UFC Brazil at the age of 44. Dana White at a press conference in Rio de Janeiro this past week announced the UFC’s return to Brazil in August of 2011, after a thirteen year absence. Royce Gracie, alongside Dana White as a guest was quickly asked ” will you be fighting in Rio? ” Smiling the veteran replied:

” I’m still thinking (on fighting in Rio). But I’m always training. This return of UFC to Brazil touched me, made me feel the wish of coming back to the Octagon. Everything has been negotiated with Dana White. Let’s wait and see. ”

Royce Gracie’s last UFC fight was a TKO loss to Matt Hughes in may of 2006. This was the only time Gracie has been finished inside the ring for his entire career ( 2 other losses came by way of corner stoppages ). Gracie has a overall record of 14-3-3 with twelve of his wins coming by tap-out.

Watch the video of Dana White in Brazil