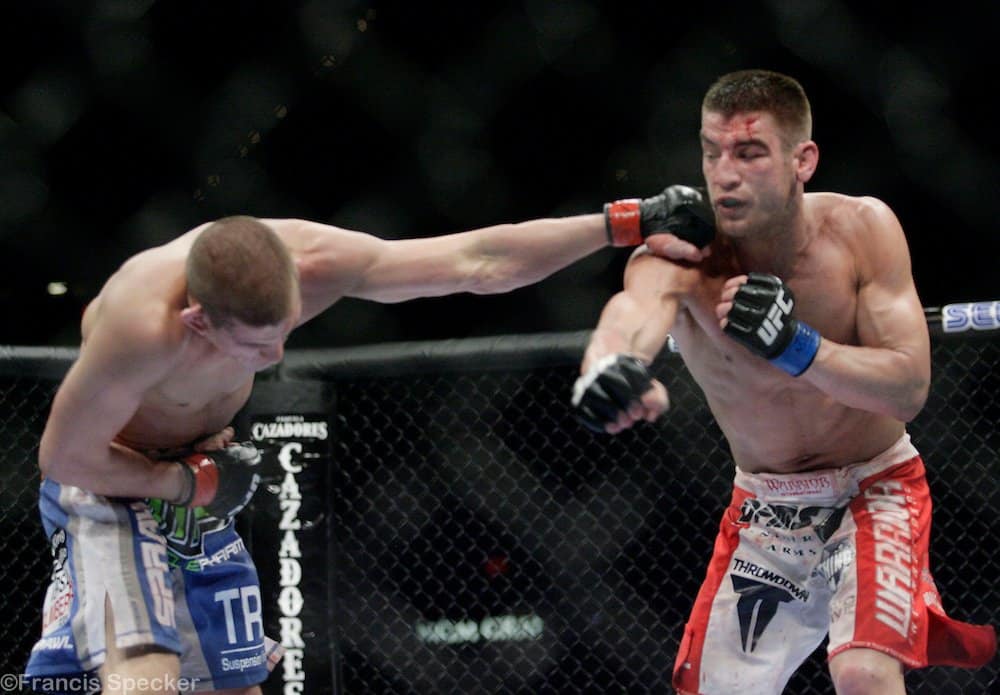 Significant Injuries: Sports hernia (late 2008)
Interesting Trivia: Was scheduled to fight Phillipe Nover at UFC Fight Night 19 (Sept 16, 2009). On the day of the fight, Nover had a seizure and the fight was cancelled. Currently is in college studying to be a paramedic.

Keys to Victory: Keep the fight standing against Lauzon and work his standing strikes. Stout is a heavy handed, technical striker who’s capable of ending the fight quickly. Although he’s been training Brazilian Jiu-Jitsu for over seven years and has only been submitted twice in his career (Florian, Estrada), his John Clark-trained opponent will likely have the advantage once the fight hits the floor. Lauzon has a solid left hook; Stout will want to circle away from that and look to stuff his trips / takedown attempts to notch the upset.

Significant Injuries: Coming off a long layoff due to a torn ACL. Has had issues with his knees for years including having meniscectomies on both. Originally thought that he wouldn’t be able to fight for 12-14 months after his surgery in early March 2009.
Interesting Trivia: At UFC 108, his brother Dan will be making his return to the octagon after debuting at UFC 64 against Spencer Fisher. Computer Science graduate.

Keys to Victory: Lauzon is a well-rounded fighter, but primarily excels on the ground with his strong Brazilian Jiu-Jitsu and wrestling. He’ll uses trips as well as anyone in the UFC and has 14 submission wins under his belt from an impressive variety of methods (RNCs, triangles chokes, armbars, achilles lock, etc.), so Lauzon is a threat to pull off a slick submission from any number of positions. He may be able to hold his own standing, but will certainly look to take the fight to the ground at the earliest opportunity. Of particular note is that Lauzon is coming off of major knee surgery (ACL) and some are whispering that he may be fighting too soon. His surgery was last March 6 and initial estimates were that he wouldn’t be ready to fight for 12-14 months. Although the knee may be ready, it’ll interesting to note if he has any ring rust.