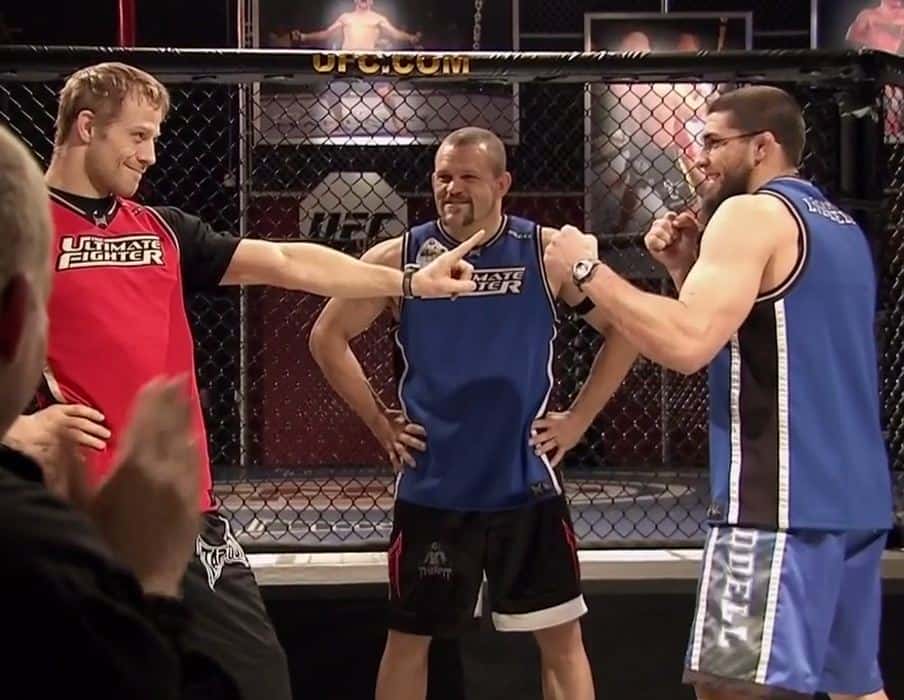 At the beginning of this episode Kyacey Uscola of the fighters in Team Ortiz seem to be questioning the training regimen put in place by the ex-Champ coach, Tito Ortiz. The over-trained fighters are complaining that the relentless style of Tito is causing them to gas in the fights. The last fighter to lose after running out of steam last week, Kris McCray, stood up for Tito as did several other members of the team. This quickly centers out Kyacey as the bad apple and Tito uses the experience to bring the team closer and focus on the goals ahead.

Temporarily the goals are all about dodge ball. The coaches matchup for $10,000 this season is a three on three dodge ball. Chuck makes quick work of Team Ortiz and sweeps Tito three to zip. Not exciting television watching a bunch of grown men playing dodge ball and certainly not as entertaining as past seasons.

It is time for this week’s matchup and Chuck having control after last week’s win chooses Court McGee to face up against Nick Ring. Nick chooses to give the “no you did-nt” finger shake to Court for calling him out earlier. Sorry Nick, but prior to this we only thought you pronounced words very well – now we simply know you like men.

Nick Ring is an extremely talented fighter and a strong contender to finish on top, however, Court McGee has also proven his talent so we are up for an exciting fight. Prior to fight time though we find out that Court is a recovered drug addict and he shares some war stories with his fellow house mates.

Quickly after the episode cuts from one scene to the next, we see Hammortree get put down to the matt in training and has to get carried off on a strecher to see if his back is broken or otherwise injured. This season has been full of injuries and mishaps. This isn’t to say that Kyacey Uscola may be right, but most of these injuries have been on team Ortiz. Hammortree does come back to say that his back contains significant swelling but has no real injury.

Hammortree may or may not get his second chance, but for now we have a fight between Nick and Court that has to get underway. Very quickly after the bell starts this competition, Nick Ring takes a straight shot and ultimately gets taken to the matt by McGee. As McGee maintains control on top he manages to land very little as Nick is able to regain his feet. Back in the center of the ring, the fighters exchange punches as well as kicks. At a little past the halfway mark of round one, Nick finds himself on Court’s back. Managing to get Nick off his back, Court still takes some punishment as Nick Ring keeps moving and controlling Court until the end of the round.

The fighters come out in round two hungry as they both are throwing punches and trying to connect with something substantial. Nick lands some decent kicks that seem to get Court’s attention. The fighters seem to enjoy the standup as they continue to fight in the center of the ring and exchange. As the seconds count down, the back and forth continues until the end of round two. This is obviously going to a third.

Anytime you take it to the judges you can’t guess the outcome on your best night and Nick Ring takes a majority decision over Court McGee. Stay tuned for next week when the wild card matchup is announced with the winner being born again with a chance to be the next Ultimate Fighter.