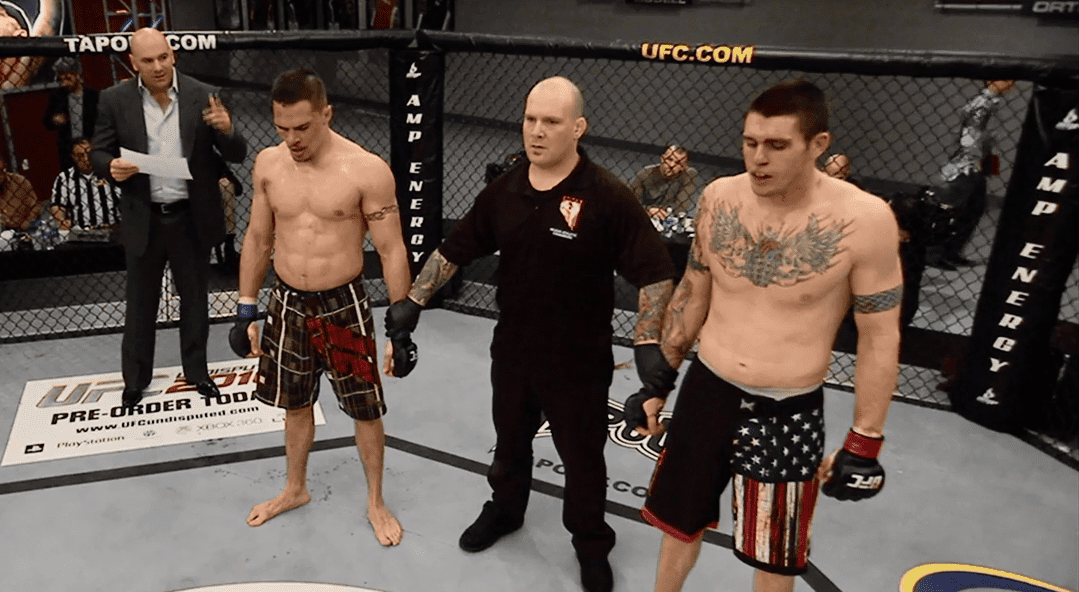 Week 8 extends a season that has been focusing on fights rather than drama, second chances and up and comers rather than washed up football players looking for a second career. It hasn’t been the most exciting season, but seems to have revisited some of the attributes that made it one of the most exciting reality shows for MMA fans.

Kyacey Uscola heads into the octagon against Kris McCray moments after finding out his new baby has been born and is healthy. Both fighters are revenging an earlier loss following this season’s theme of second chances. The first wild card in TUF history features two fighters from Team Ortiz so Tito is sitting this one out.

The fighters step into the center and Kris comes out kicking but immediately takes a clean punch from Uscola. They continue to feel each other out throughout the first minute of the round when Uscola kicks McCray in the center if his left shin cause McCray to wince. McCray uses instinct to wrap Uscola up and pins him against the fence. McCray connects with some knees as he holds his opponent ultimately cracking Uscola in the cup. The last thing this fight needed was more time. To finish the round a couple of nice takedowns result in McCray in control and landing some ground and pound.

Possibly feeling some urgency, Uscola comes out swinging, but McCray ends up with a quick takedown and on top of Kyacey Uscola. After about a minute of complete control, Kris McCray wraps up Kyacey’s arm and manages the submission.

It is the time of the season o choose the quarter final fights and it isn’t call. The fights are as follows:

Back at the house, a guest enters and it is Forrest Griffin with the new version of the UFC video game, UFC 2010. It is a two hour reprieve to let the fighters hang loose and kick some virtual ass. Then after Nick Ring finds out he has reinjured his ACL and is questioning whether or not to withdrawal from the tournament. Dana White pays the house a visit and Nick confirms his decision to withdrawal and get his third reconstructive surgery on his left ACL. Yet another second chance is in store for someone.

Before Dana leaves, he announces to the group of Nick’s decision and lets them know he will consult the coaches for a decision. Hammortree mans up and chases Dana down to claim the spot and in typical Dana style he walks back into the house and says the decision is made. Dana always loves someone willing to fight so Hammortree did himself a great service in confidently expressing to Dana his desire. Joe Henle was a bit shocked at the quick decision, but it is never as appealing the second time is it?

Taking the fight on short notice, James Hammortree runs out to meet Court McGee in the center of the octagon and lands a jab. Court returns a solid kick at the close of the first minute of round one. Minor exchanges continue and at the end of a kick Court is able to catch the heel of Hammortree and after some swiveling gets him to the ground. Quickly returning to his feet however, Hammortree connects with a few punches. McGee takes another punch or two, but manages to grab Hammortree and slam him to the ground. Again Hammortree is quick to his feet. Hammortree eludes a third takedown, the fighters exchange and Hammortree scores his own takedown of McGee. McGee is able to switch position prior to the end of the round making it as close as it can get.

Round two kicks off and both fighters seem eager to pick the action back up. Then only 24 seconds into the round, Court McGee is able to sink in a standing Guillotine choke and has James Hammortree tap. Not something you see often, but something that Hammortree will know to avoid later. Impressive win for Court McGee and the first fighter to win his quarterfinal fight.