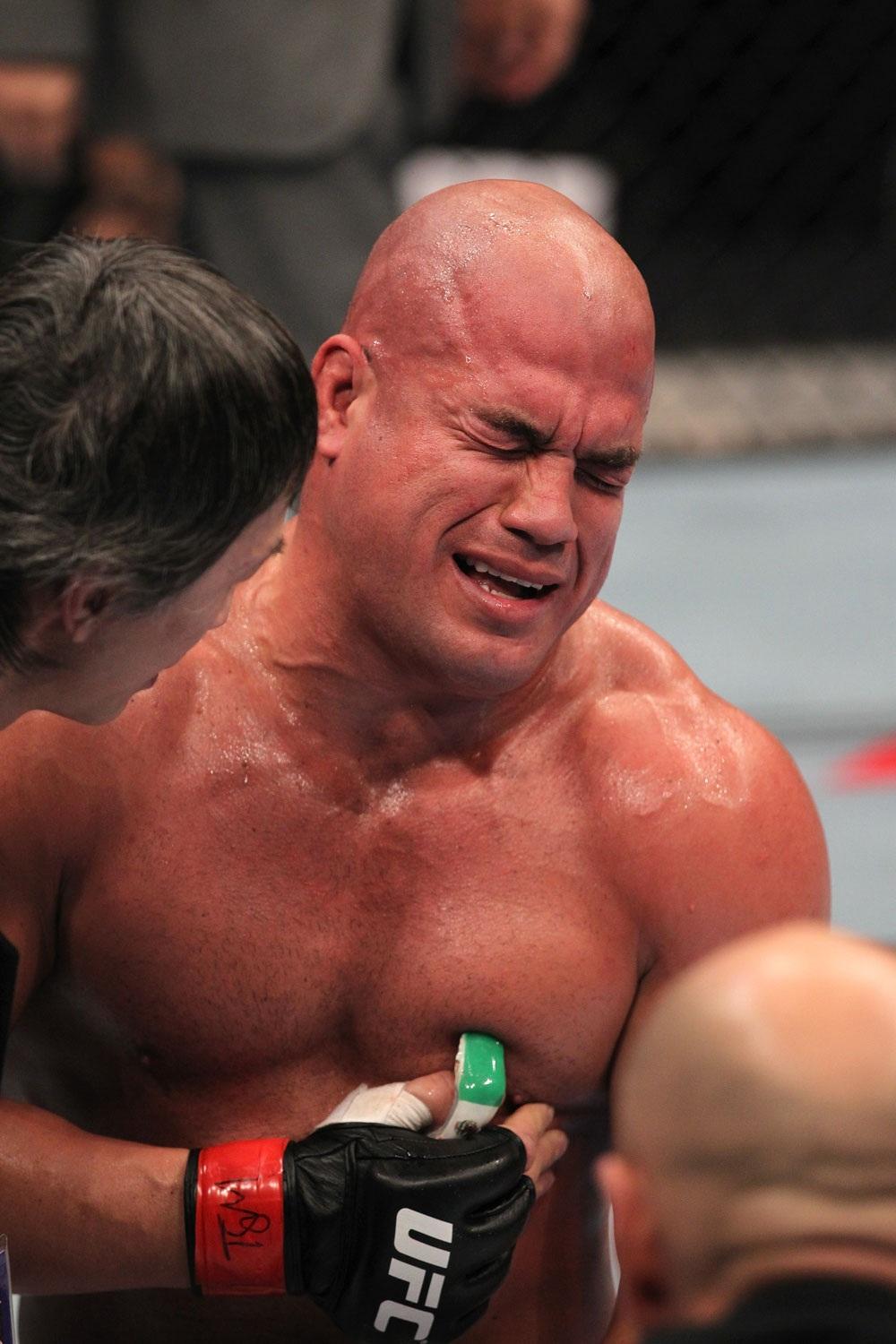 In this week’s Ultimate Fighter we are promised two things. The first is an exciting quarter final fight, the last of four as Jamie Yager fights Josh Bryant in what is expected to be a one sided fight. The second is a first time event for TUF in its history. If I was a betting man, and I am, it would have to do with the fact that we all know by now in that Tito and Chuck are not fighting at the close of this season.

Jamie towers over Bryant when they stand toe to toe. Both fighters come across as solid fighters, confident fighters. The episode is dedicated to this final matchup of the quarter finals so we are quickly at fight time.

The fighters come out eager to win and both seem energetic. Yager comes in for a punch but gets caught with a strong punch and finds himself against the cage with Bryant in control. Yager does connect a nice knee while defending himself and after a bit more shuffling they are back to the center of the octagon. As we have come to expect Yager throws several kicks including one in the jewels.

So after the short timeout the fighters are at it again. They exchange punches in a short flury and Yager throws many more kicks as Bryant connects with punches. Liddell begs for Bryant to throw and when he finally does Yager drops like a sack of potatoes. He finds himself on his back trying to defend as the round comes to an end.

Round two begins and as the fighters meet in the center Yager pats Bryant on the back as to say nice job that first round. Josh decides to return the favor and knocks Yager in the baby maker. Not sure if it really landed or Yager wanted an extra rest and it looked like high thigh. The fighters start to really engage and kicks are landed, punches are landed, and as Bryant is able to catch a leg kick thrown by Yager, the favorite is finding himself once again on his back defending.

Ultimately the fighters are on their feet and Yager seems exhausted. Bryant continues to work, but is swinging wildly. With two minutes to go in the second round, Bryant connects witha nother punch on the jaw of Jamie Yager. After an additional exchange, a tired Yager falls and Bryant lands on top. With minor ground and pound, Bryant does land a few more points controlling Yager. Tito is shouting for his fighter not to give up, but that seems exactly like what is going on as Bryant is not doing anything spectacular.

When the roudn ends though Yager isn’t returning to his corner. Dana announces the judges have it as a tie so there will be a third round. As we return from a commercial break we find out how wrong Dana is. There will be no thrid round as Jamie Yager decides to quit! He literally sat on the stool and shook his head. Nothing more than being tired – the pathetic lack of desire takes Tito over the limit. His friends help him out and escort him to an ambulance.

Now for the second item we were promised today. Dana takes Tito aside and says he has a top notch doctor lined up for him to review his injury. However, since Tito will not be fighting Chuck Liddell due to the injury, Dana decides to take Tito off of the show and have his replacement finsih the coaching for the rest of the season. So for the first time in TUF history, a coach is taken off of the show.

Tito storms off and Dana White has to announce to his team that Tito is off the show. The team seems pissed, however, eventually Tito does return to let his team know in person that he has to leave the show.

The semi fainal fights are annoucnes and ther are as follows:

As the show concludes, we see who we could figure would be the replacement since we know Rich Franklin is the new fight arranged for Chuck Liddell. We will see what this ultimately means for the Team Punishment as the season wraps up.