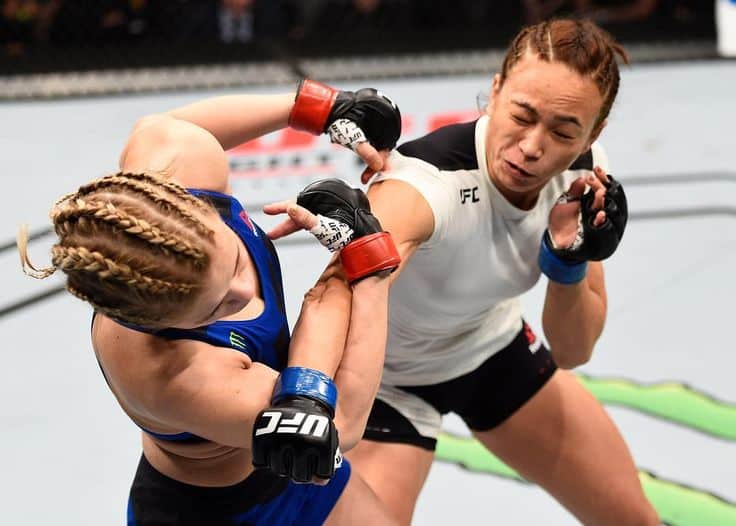 As Super Saturday approaches this week, two of the most prominent events deal with the Strikeforce: Miami title match between #1 ranked Cyborg Santos and #2 ranked Marloes Coenen and the Freestyle Cage Fighting 135 Women’s Grand Prix.

In the tournament itself, #4 ranked Shayna Baszler (9-6) is the odds on favorite to win, and is favored to defeat Megumi Yabushita (18-15) in the opening round.

#7 ranked Jennifer Tate (5-1) and Kaitlin Young (4-3) is the toughest match to call. Both are hard hitters, with the reach going to Young. Tate had recently been to Thailand to work on her striking and kicks, and has been training heavily in her grappling.

Liz Carreiro (5-5) is coming off of a six month wait to fight, and Jan Finney (6-7) is coming off two back-to-back KO wins last month. I have to give the edge to Finney, who has been impressive in her last fights.

AJ Jenkins (16-2) is on a six fight win streak, but Sarah Schneider (4-3) has been facing stiff competition in her fights. However, I am taking Jenkins in this one.

On the heels of the FCF tournament, Strikeforce has also announced 145 and 135 pound tournaments starting in April. The also announced that they will crown a 135 pound champion, when #1 ranked Sarah Kaufman will face # 2 Takayo Hashi on Feb. 26 in San Jose.

The current odds for the upcoming title fight between Marloes Coenen (17-3) and champion Cyborg Santos (8-1) this Saturday at Strikeforce: Miami sees Cyborg favored (-525) with Coenen (+375) the underdog. This week, fighters have been weighing in on the match, saying it will be closer than everyone thinks.

#1 ranked 135 pounder Sarah Kaufman – “Cyborg really has that strength advantage, so I think it is really going to be hard for Marloes to deal with her stand-up. If she can get Cyborg down, which Cyborg is open for, I think Coenen is pretty slick on the ground. Marloes has pretty good stand-up too, but I think Cyborg will take the fight.”

#3 ranked 135 pounder Roxanne Modafferi – “I think it could go either way. Cyborg is in fantastic shape. She definitely has that going for her, but I think she might gas out. If Marloes can survive the first round and make her blow out all her gas, maybe Marloes can use her technique and superior experience to take it to her. I am rooting for Marloes.”

135 pounder Molly Helsel – “Cyborg is just a powerhouse. She is training in San Diego right now, and from all accounts that I have heard, she really is an animal. I think Marloes has been around for so long, and she has been in those situations before. I think Cyborg has not faced an opponent like Marloes, who knows to expect that kind of power, but has the technique to overcome it. I am kind of pulling for Marloes, but anything can happen.”

Next week, we will have the aftermath of the week’s fights and start to preview the Featherweight match between Sarah Kaufman and Takayo Hashi.