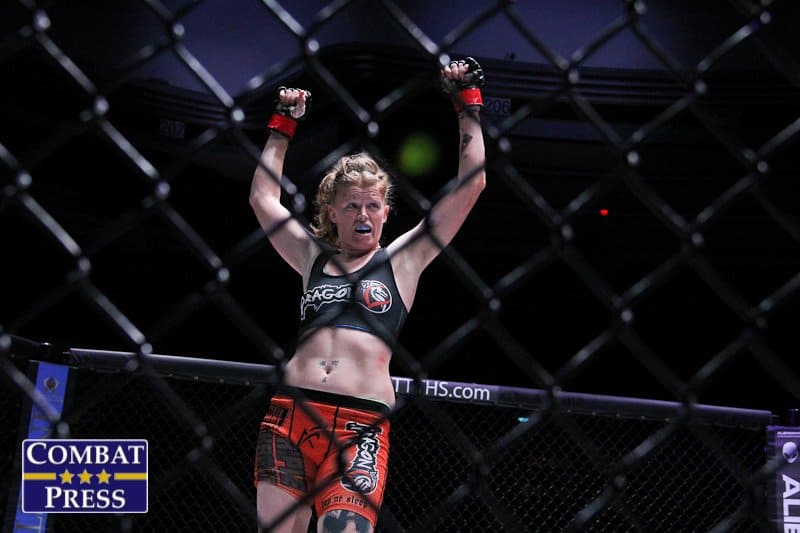 The Women’s MMA rankings are up, as the 135 pound division has been shaken up a bit. With her victory over Hitmoni Akano, Strikeforce 135 pound champion Sarah Kaufman is ranked #1 in the division, with last month’s #3 ranked fighter Roxanne Modafferi climbing to second. Shayna Baszler moves up to third, with Ta-ka-yo Hashi and Hitomi Akano taking fourth and fifth respectively.

In the 115 division, Megumi Fujii stays at #1, as does the retiring Miku Matsumoto in the second spot. Megumi Yamaguchi, with her upset win of then #3 ranked Yuka Tsuji, take her third place spot in the rankings. Tsuji drops to fourth, with Lisa Ward dropping to fifth.

Sources close to Fightergirls are saying that the upcoming Strikeforce 135 pound tournament will be delayed a few months. Initially set for April, the upcoming CBS cards and current qualification tournaments are most likely the reason for the tournament being delayed.

Add Titiana van Polanen Petel to the Upcoming Glory 135 tournament on March 27, which will send a European representative to the Strikeforce 135 tournament.

#7 ranked 135 pounder Jenn Tate announced that she will be dropping out to the Freestyle Cage Fighting tournament due to being pregnant. She is expect to out a year, and we wish her the best. There is no word on a replacement fighter for #3 ranked Shayna Baszler.

In the only ranked fight this past week, #7 ranked 115 pounder Jessica Aguilar defeated Valerie Coolbaugh via rear naked choke at 3:28 of round 2 at the AFL: Rumble at the Rock 50 in Hollywood, FL.

Next week we will have more tournament news, as we are expecting several names to drop in the Golden Glory and Freestyle Cage Fighting tournaments.

Listen to the latest Fightergirls Podcast – “The Wild, Wild 135 pounders”.