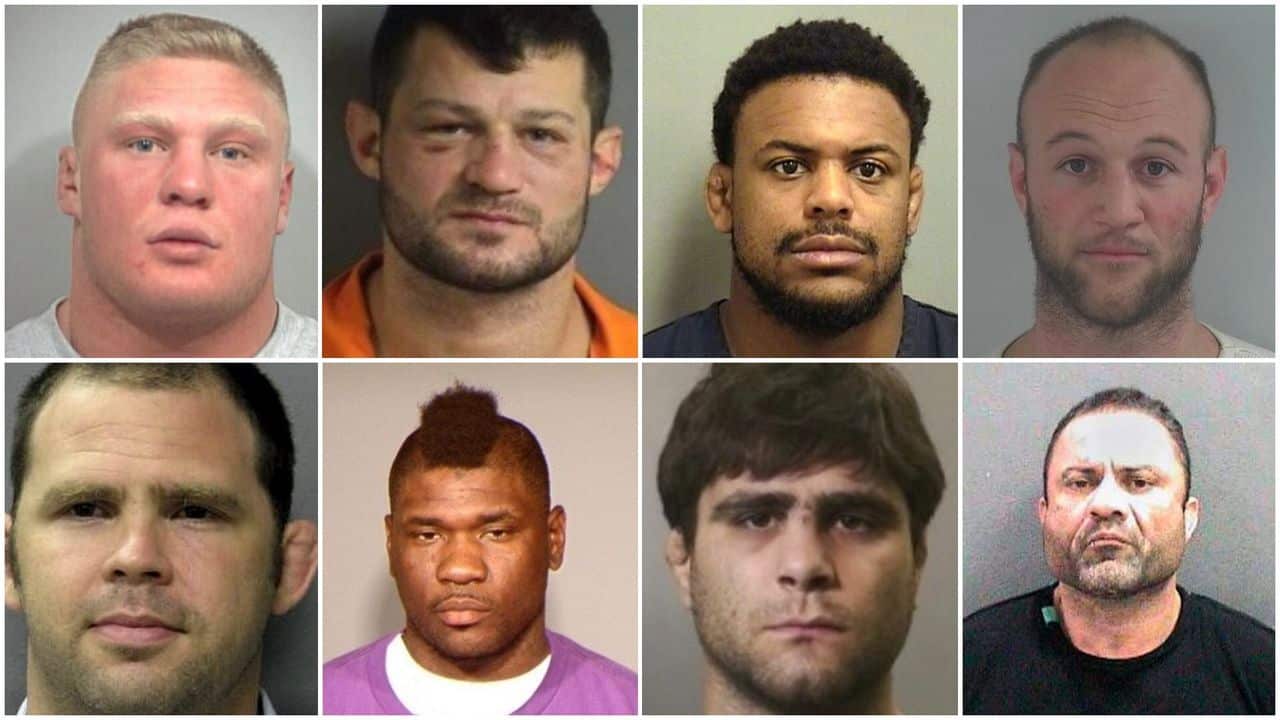 Name: War Machine (aka Jon Koppenhaver)
Arrest Date: March 30, 2010
Location: Pacific Beach, CA (Thruster’s Lounge – San Diego area)
Charges: Assault with a deadly weapon. War Machine was thrown in the poke again for fighting at a bar. Unclear if the “weapon” was his fist and he was stuffed wearing a spit bag. Nice! Props to TMZ for the photo.
Disposition: Pending. I’m sensing a pattern here with War Machine!
Links: Fighter Homepage

Name: Anthony Johnson
Arrest Date: June 27, 2009
Location: Hayward, CA
Charges: Domestic violence, battery, death threats, and destroying a phone to prevent the report of a crime… all the result of an alleged altercation with an ex-girlfriend. Bitch set me up?
Disposition: Pending or dismissed – he’s still fighting in the UFC.
Links: Fighter Homepage

Name: Hermes Franca
Arrest Date: November 6, 2008
Location: Jupiter, FL
Charges: Boozin’ and cruisin’. Franca was arrested on suspicion of DUI in his hometown after attending WEC 36 hours earlier in Hollywood, FL. Like my mama says, “nothing good ever happens after 10PM”.
Disposition: Unknown – although, likely a slap on the wrist.
Links: Fighter Homepage

Name: Luke Cummo
Arrest Date: Sometime between October 13-20, 2008
Location: Nassau County, NY
Charges: Suspicion of DWI. Most assumed that the DWI was a result of drinking too much, however, in Cummo’s case, he later attributed it to a second hand high from marijuana and “too many chicken wings”.
Disposition: Probation? C’mon, he was high on wing sauce!
Links: Fighter Homepage

Name: Chris Leben
Arrest Date: April 30, 2008
Location: Clackamas County, OR
Charges: Leben turned himself into the Clackamas County (OR) Sheriff’s office after a bench warrant was issued for his arrest for an unknown parole violation stemming from a 2005 DUI offense.
Disposition: Sentenced to 35 days in jail.
Links: Fighter Homepage | Official Fighter Clothing

Name: Renato “Babalu” Sobral
Arrest Date: July 14, 2007
Location: Tampa, FL – Hard Rock Hotel and Casino
Charges: Battery and trespassing. In 2007, former Light Heavyweight contender Babalu Sobral was in Tampa, FL for a WFC event and got into it with a bouncer. The bouncer alleges that Babalu spit on him.
Disposition: Noone knows nothing.
Links: Fighter Homepage | Official Fighter Clothing

Name: Kimo Leopoldo
Arrest Date: Sometime in 2007
Location: I’m guessing California
Charges: Domestic violence. TMZ reported that Kimo’s been arrested several times over the years, but his 2007 arrest was for domestic violence. If you can’t beat ’em in the cage, beat ’em out of the cage?
Disposition: Unknown – he’s a colorful chap, though.
Links: Fighter Homepage

Name: Kimbo Slice
Arrest Date: May 2002
Location: Miami Beach, FL
Charges: Who said that drinking and guns are a bad combination? Kimbo was thrown into the poke in South Florida on a felony weapons charge and for having an open container of alcohol in public.
Disposition: Weapons charge dismissed, attend alcohol education class.
Links: Fighter Homepage | Official Fighter Clothing