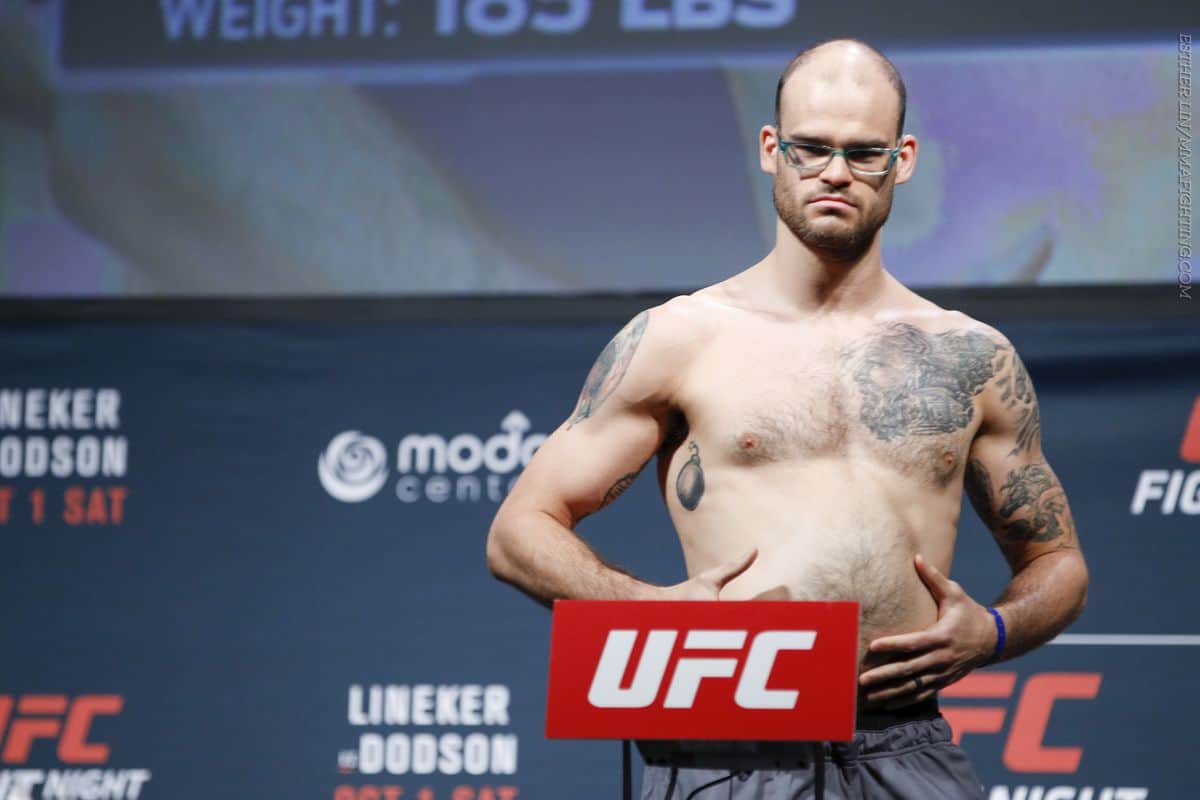 No one likes being cut, but, it’s all part of the cream rising to the top. Although they reached the pinnacle of mixed martial arts, the following fighters had their contracts terminated by the UFC for one reason or another. It’s not all bad, though. Often, the UFC will invite back terminated fighters if they string together a few solid wins in other organizations, so, we’ll keep an eye out for them!

Name: Tim Hague (Heavyweight)
Month of Termination: May 2010
UFC Record: 1-3
Circumstances: Tim “The Trashing Machine” Hague started out strong in the UFC with a submission win over rising prospect Pat Barry, then lost his next three fights in the org. His appeal that his most recent loss (to Joey Beltran) was a result of taking the fight on very short notice – and essentially doing the UFC a favor – fell on deaf ears.

Name: Jonathan Goulet (Welterweight)
Month of Termination: May 2010
UFC Record: 4-5
Circumstances: A veteran of nine fights in the UFC, the Canadian lost four of his final six including losses to Mike Swick, Marcus Davis, Dustin Hazelett, and Josh Koscheck. Although his losses were to top-tier competition, the UFC is always stacked at 170 lbs. and likely wanted to make room for some younger fighters.

Name: Paul Daley (Welterweight)
Month of Termination: May 2010
UFC Record: 2-1
Circumstances: The mouthy Brit impressively won his first two fights in the UFC over Dustin Hazelett and Martin Kampmann, then met Josh Koscheck to determine the #1 contender in the weight class. At UFC 113, Koscheck dominated Daley and received an ugly cheap shot post-fight. Not surprisingly, Dana White cut Daley on the spot.

Name: Kimbo Slice (Heavyweight)
Month of Termination: May 2010
UFC Record: 1-1
Circumstances: In a surprising move, the UFC cut the backyard brawler and YouTube sensation after only two lackluster performances. Slice appeared on last season’s The Ultimate Fighter 10, then bested a timid Houston Alexander at the show finale. He was then dominated by Matt Mitrione at UFC 113 and got the sneaky chop by UFC brass.

Name: Paul Buentello (Heavyweight)
Month of Termination: April 2010
UFC Record: 3-3
Circumstances: This is the second time that the “Headhunter” has been terminated by the UFC. In his first stint with the organization, Buentello won his first three fights before being highlight reel KO’ed by Andrei Arlovski. His second stint ended after two losses where he showed a one dimensional approach. Get this man a ground game, stat!

Name: Jason High (Welterweight)
Month of Termination: April 2010
UFC Record: 0-1
Circumstances: We barely knew the “KC Bandit”. The DREAM and Affliction veteran fought just once in the organization at UFC Fight Night 21, where he dropped a three round decision to Charlie Brenneman. Although he came into the fight as a modest favorite, he likely got the quick hook for reasons other than his single loss.

Name: Rob Emerson (Lightweight)
UFC Record: 3-3 (1 No Contest)
Month of Termination: April 2010
Circumstances: The definition of “win one, lose one”, The Ultimate Fighter 5 participant started out strong in the UFC winning his first two fights (with a no contest), including a 1st round KO over WEC tough guy Manvel Gamburyan. “The Saint” then dropped three of his next four fights (decision losses in the mix) to facilitate his exit.

Name: Brad Blackburn (Welterweight)
UFC Record: 3-2
Month of Termination: April 2010
Circumstances: A former contender in the now-defunct IFL, “Bad” Brad Blackburn went 3-2 in the octagon. Originally a boxer, Blackburn won his first three fights in the UFC, including a win over Ryo Chonan, then took a step up in competition taking on Amir Sadollah (Unanimous Decision Loss) and DaMarques Johnson (TKO Loss). That was it.

Name: Fabricio Camoes (Lightweight)
UFC Record: 0-1-1
Month of Termination: April 2010
Circumstances: The gritty Brazilian got the ax shortly after a tough loss to Lightweight stalwart Kurt Pellegrino at UFC 111. Camoes debuted in the organization at UFC 106, where he fought to a draw against grappler Caol Uno, then was awfully close to stopping Pellegrino until he succumbed to a well-placed Rear Naked Choke. Two and out.

Name: Rafaello Oliveira (Lightweight)
UFC Record: 1-2
Month of Termination: April 2010
Circumstances: The affable Rafaello “Tractor” Olivera had a rather unassuming stint in the UFC. He snuck in a snore-inducing decision win over John Gunderson at UFC 108, sandwiched by two snore-inducing decision losses to Nik Lentz at UFC 103 and Andre Winner at UFC Fight Night 21. Hey, the UFC wants exciting fights, don’t they?

Name: Matt Veach (Lightweight)
UFC Record: 1-2
Month of Termination: April 2010
Circumstances: Matt Hughes-trained wrestler Matt Veach dropped two of his three fights in the UFC, including a exciting loss to UFC Lightweight champion Frankie Edgar. Veach picked up his first win in the octagon in a tough fight against Matt Grice at UFC Fight Night 17, lost to Edgar, then lost to Paul Kelly via Guillotine Choke at UFC 112.

Name: Mostapha Al-Turk (Heavyweight)
UFC Record: 0-3
Month of Termination: April 2010
Circumstances: Al-Turk whiffed in his three fights with Club Dana. The always improving Cheick Kongo brutalized him at UFC 92, Al-Turk took some eye pokes during a TKO loss to Cro Cop at UFC 99, then was rumored to have been cut. He got a reprieve due to the circumstances of his loss to Cro Cop, but lost to Jon Madsen via UD at UFC 112.