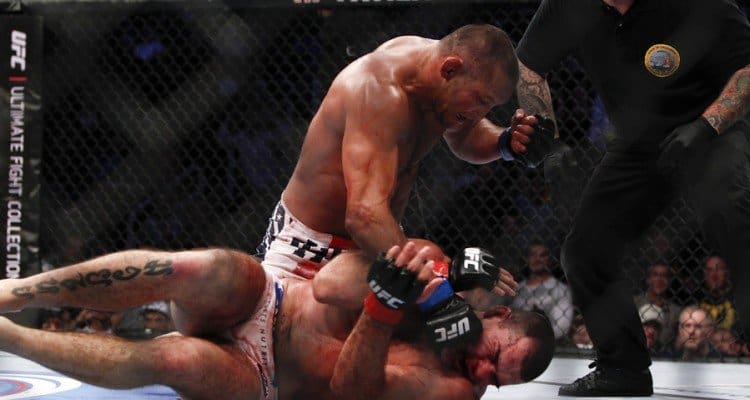 Welcome to the second Gambler’s Challenge: Callin’ out the Moose.

Straight from a sensational comeback victory in the previous Gambler’s Challenge: Moose vs. blue63, I’m tanned, rested, and ready to outwit another hapless opponent who truly believes that he can pick ’em better than me. Simple fact – I bring it, others don’t. Next up and stepping into the crosshairs from the MixedMartialArts.com Underground forum is a chap who goes by the name “Mad Xyientist“. I don’t know much about him other than that hails from Charlotte, NC, he’s a self-proclaimed winning MMA handicapper, and a prolific forum poster. In fact, he’s racked up almost 14,000 posts in the last 2.5 years alone on the UG. Bravo! 14K posts may seem like a lot to most, but, you have to realize that Mad Xyientist doesn’t have the usual distractions of a job, woman, or any legitimate social interaction to stop him from his ultimate goal of 15K posts. He’s like the Brock Lesnar of the UG – he cannot be stopped! While he’s busy pounding away on the keyboard debating the merits of Alan Belcher’s god-awful tattoo, I’m performing legit analysis and picking MMA winners (as usual). Well, it’s time to teach this young man a lesson, “Moose style”. Follow the blow-by-blow below.

Moose’s Pre-Event Comments: This Gambler’s Challenge has gone over like a turd in a punch bowl for me, and thankfully, will end this Saturday. Barring a miracle on the level of Lindsay Lohan getting sober, I’ll lose this fiasco. Badly. Regardless of the picks or strategy, I just can’t win. Perhaps a viable strategy would be the ‘ole “whatever I choose, you go opposite”. Putting down my frosty Jack and Coke and pulling out a calculator, if someone had actually bet against me, they’d be up a mansion lately. I don’t know Mad Xyientist’s recommended plays for UFC 109, but, I’m guessing that I’m mathematically eliminated (or close). Nevertheless, I’m plowing ahead, releasing a few plays for UFC 109, and anxiously awaiting the next Gambler’s Challenge to redeem my sullied reputation. Hell, when you are Orioles fan like me, you’re always looking to next season. Without my usual bravado, and as detailed within Moose’s Pre-Event Picks: UFC 109 – Relentless, below are my recommended plays.

Mad Xyientist’s Pre-Event Comments: After a disastrous Round 3, I’m coming out in Round 4 with the intentions of scoring the KO. I’m sorry for anyone who played along with me in Round 3, but I promise to return to my previous winning ways with a good card this week. I know Moose is already mentally defeated after having lost money 3 weeks running, so let’s just go ahead and put this antelope down before animal control steps in. As detailed within Mad Xyientist’s Pre-Event Picks: UFC 109 – Relentless, below are my picks for UFC 109.

Moose’s Pre-Event Comments: Well, this is getting ugly. Some of the others on the site have asked if I’d be interested in moving to a farm where I’d have plenty of room to run. Oh no, I’m not falling for that one – I see what they’re getting at. A farm would be nice, but I think they have alterior motives. Time to break the schnide, below are my picks for WEC 46 and UFC Fight Night 20. I’ll personally be octagon-side to will my plays to victory at the Fight Night. Look for the George Clooney looking chap… I’ll be in the next section from him.

Mad Xyientist’s Pre-Event Comments: To be honest, I’ll be somewhat surprised if Moose even answers the bell for Round 3. Round 2 looked much like Round 1, with your boy Mad Xyientist counterstriking every jab Moose threw, which seemed to fall 2 feet short. Can I make this 3 events in a row? Just as Wanderlei Silva found out, it’s hard to destroy someone 3 times in a row, but Moose is not making this overly difficult on me. Hopefully his embarrassing defeats have taken him from in front of the mirror and put him back on his sofa, studying a little tape. As detailed within Mad Xyientist’s Pre-Event Picks: WEC 46 / UFC Fight Night 20, below are my recommended plays for WEC 46 and UFN 20:

Moose’s Post-Event Comments: I’m nothing, if not consistent. For the second Gambler’s Challenge event in a row, I picked a fight to load up on, and got burned. This time the Miller vs. Lauzon fight was the appealing one, with Danny Boy being the culprit. For those who watched the fight, Lauzon dropped the favorite Cole Miller and was pretty damn close to finishing the fight, but couldn’t. As a result, Miller caught him later in the fight with a nice submission, and all but sealed my demise in The Gambler’s Challenge: Moose vs. MadXyientist. Of course, I won my other two picks – dos Santos and a nice underdog pull in picking Sam Stout – but the damage was done and I ended up being in the red for the second Gambler’s Challenge event in a row. Although not mathematically eliminated from winning this pissing match, it’s as likely as the New York Yankees winning this year’s Super Bowl (yeah, you read that right). I’d like to save some face and play it out for the honor and glory, but mainly because I don’t want to look like an even bigger chump at this point. I’ll be pulling out all of the stops to right the ship – the voodoo dolls, crystal ball, and Ouija board. If that doesn’t work, I’ll be the one floating in the life raft.

Moose’s Pre-Event Comments: Well, well… I find myself in a precarious position right now, and for once it’s not because of something that I said to the bouncer with the Napolean complex at the local bar. I’m down more than $500 after one event! Ouch – Bernie Madoff’s investors got a better return on their money than those who played my picks at WEC 45: Cerrone vs. Ratcliff and Strikeforce: Evolution. While most would agree that I’m infallible (occasional bender aside), I took a calculated risk in putting the bulk of my event bankroll on Josh Thomson and got burned. Although he’s the only chap that I know of who’s abs rival mine, Melendez punked him on way to a unanimous decision and cost me some serious cash. Besides my wallet being a little lighter, I’ve also had to endure celebratory chatter from MadXyientist. That’s enough motivation to make the crippled walk. I’m ready to end the skid, and luckily enough, I see some nice opportunities at UFC 108: Evans vs. Silva. As detailed within Moose’s Pre-Event Picks: UFC 108 – Evans vs. Silva, below are my recommended plays. I feel good about them, and it has nothing to do with the (ahem) Xenergy that a “friend” just swung by with. Check out the latest lines on our MMA Betting Superboard, pick a sportsbook, and select “Click to Bet” if you want to make a few bucks. Get busy!

Mad Xyientist’s Pre-Event Comments: Happy New Years everyone. I had a little too much Xynergy last night, so please excuse any glaring grammatical errors today. I hope you were as amused as I was by the last event’s outcome. Moose had a lot to say before the event last time, let’s see if he hasn’t quieted down a bit. Hopefully he invested more time in formulating his picks than his shots at me this time around. After all, it wouldn’t look good if a lowly forum poster beat an “expert” two events in a row now, would it? As detailed within Mad Xyientist’s Pre-Event Picks: UFC 108 – Evans vs. Silva, below are my picks for UFC 108.

Event #1: Combination of WEC 45: Cerrone vs. Ratcliff and Strikeforce: Evolution

Moose’s Post-Event Comments: Off to a rotten start here. I don’t like spotting anyone $531 in a Gambler’s Challenge, but, if there was ever an optimal time to do so, the earlier the better. No sweat, I’ll put back on the Superman cape and refocus, and, being down such a large amount after one event will make it even sweeter when I roar back into contention at UFC 108: Evans vs. Silva! As for what happened in the first event, I put my eggs primarily in Josh Thomson’s basket. I must have been swayed by his dreamy abs or flowing locks and chose to ignore the ring rust that he would likely bring into the fight. Although the fight is likely to show up on many “Fight of the Year” lists, that wasn’t the best that Josh Thomson has to offer. Melendez looked great, but perhaps a bit slower (due to the broken leg) and general ring rust on Thomson’s behalf was my undoing. Should that fight have progressed a little differently after the first, and I’d be the one doing the Irish gig on the UG. Rumor is that Mad Xyientist is so pumped by the results, he’s hooking everyone with extra fries at the drive-through. Eh, I’ll get ’em next time.

Moose’s Pre-Event Comments: Let’s get it on! Straying a little from the usual scenario (que bad Tiger Woods joke), the first Gambler’s Challenge event is actually a combination of any three or four fights from the WEC 45: Cerrone vs. Ratcliff and Strikeforce: Evolution shows this weekend. Some good fights are on tap, and, between the two events, there’s 14 fights with lines – plenty of opportunity for Mad Xyientist to realize that he’s in over his head. As detailed within Moose’s Pre-Event Picks: WEC 45 / Strikeforce: Evolution, below are my winners. Readers should notice immediately that we immediately differ on two of our picks; that should be Mad Xyientist’s first inclination that he’ll lose those. Want to have some fun as as well? Head on over to Bodog, or any of our other preferred sportbooks, and drop a few bucks into an account. Good times. Someone’s taking the early lead in the Challenge… who will it be? Good luck to Mad Xyientist!