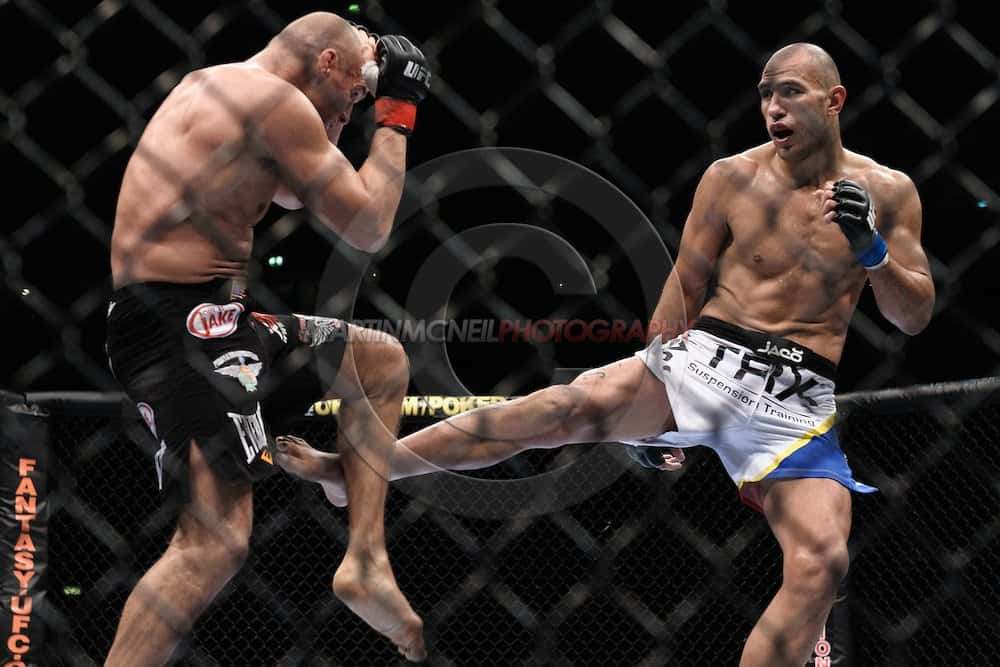 Analysis:
Last Saturday’s Spike TV-televised UFC 105: Couture vs. Vera event is a distant memory, and, for underdog players, what a night it was. The event featured eleven solid bouts, although the main event won’t exactly be spotlight material in any future UFC “Greatest Fights” DVD. Of the eleven fights, a whopping six underdogs won. The underdogs that won weren’t huge dogs – the biggest upset of the night was Dennis Siver at +300, but Nick Ospiczak covered at +240 and Dan Hardy at +190 topped a skeletal Mike Swick in a thrilling fight (well, at least for him). For those that took my advice, you won three of four fights – including an underdog winner in Michael Bisping.

In analyzing the main event, my crystal ball was clear-as-a-bell in predicting that Couture would grind out a decision. In my UFC 105 pre-event picks, I mentioned that I spoke directly with several MMA handicapping experts who questioned why the line on the Couture fight was so tight. Well, the fight ended up being a lot closer than some anticipated, but the end result is all that matters for MMA gamblers as Couture ate some strong kicks, but ultimately came away the victor – disputed decision or not. The sole loss of my four recommended plays was on Mike Swick. Hat’s off to Swick – I’ve seen him fight as high as 205 lbs, but he’s taken his camp’s advice and mastered living lean and pre-event cuts to now fight at 170 lbs. However, in looking at Swick, I’m not sure that 170 lbs is truly the best fit for him any longer – Travis Bickle look-alike Dan Hardy controlled the action and landed the heavier blows against the perhaps-too-lean Swick. The underdog Hardy dominated, and, as a “reward” is next in line for Georges St. Pierre… have fun with that! Michael Bisping worked an optimal game plan for victory to perfection as he turned his fight against BJJ black belt Dennis Kang into a glorified kick boxing match and stopped him via strikes. Among others upsets, Ross Pearson (+160) scored a nice upset against gritty veteran Aaron Riley, Nick Ospiczak looked like a new man since his TUF appearance and bested a solid Matthew Riddle, slight dog Alexander Gustafsson (+125) let his hands do the talking for a nice KO, and Dennis Siver shocked Brit Paul Kelly with excellent strikes in the 2nd round. Coupled with the Couture and Bisping winners, my 3rd recommended play winner of the night called John Hathaway dominating Paul Taylor on the mat for a UD. In other results, ex-addict Matt Brown continues to look legit, while Terry Etim and Andre Winner breezed in their victories. No rest for the weary – WEC 44: Brown vs. Aldo takes place Wed (11/18), while UFC 106: Ortiz vs. Griffin is this Sat (11/21). More winners coming your way – get on over to Bodog – or any of our other recommended sports books – and do something about it!