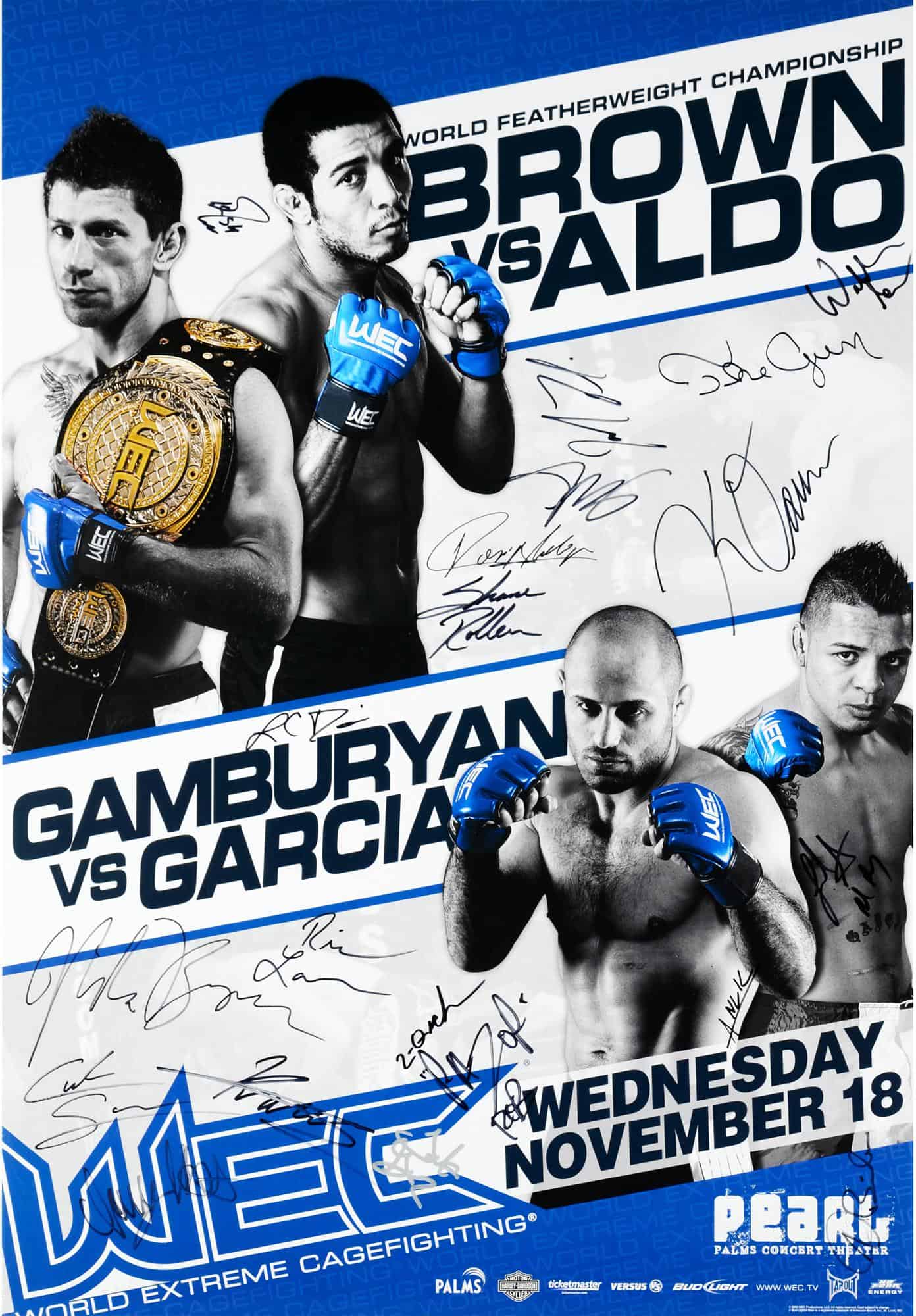 Analysis:
The dogs were barking again at WEC 44: Brown vs. Aldo as five underdogs prevailed in the evening’s fights. The event ended in spectacular fashion last Saturday, and, in the process crowned a new featherweight champion and legitimate contender for best pound-for-pound fighter in MMA. After a back and forth first round, Jose Aldo (+100) used a string of unanswered shots to gain a TKO victory over champ Mike Brown at the 1:20 mark in the second round. Although both landed shots in each round, Aldo’s speed seemed to provide a nice advantage and allowed him to gain dominant position to pull the TKO via ground and pound. Aldo now comes to 16-1 overall, and hasn’t lost in almost four years. Slight underdog Manny Gamburyan (-110) took one step closer to meeting Jose Aldo for a shot at the title as he squeaked out a 30-27, 29-28, 29-28 unanimous decision over the always aggressive Leonard Garcia. Gamburyan’s takedowns and wrestling seemed to seal the victory over Garcia in a fight that featured some surprising trash talking throughout. “Razor” Rob McCullough dropped his third fight in his last five as WEC newcomer Karen Darabedyan (+125) won a split decision. The Judoka ace Darabedyan showed nice standup and a strong beard as he actually dominated a fight in which one judge shockingly had McCullough winning all three rounds. What fight were they watching?

Shane Roller (+115) bested favorite Danny Castillo in a battle of former All-American collegiate wrestlers. Roller and Castillo had a nice scrap going trading shots and battling for position until Roller was able to slap a rear-naked choke on Castillo in the third after taking his back and softening him up with punches. Roller now moves into likely title contention. Exciting scrapper Antonio Banuelos (-250) bested Kenji Osawa in a bantamweight fight. Banuelos scored the UD against a game, but ultimately overmatched Osawa. Kenji Osawa has now dropped six of his last 13 fights (including two draws) and has only come away a winner once in four tries in the WEC. Kamal Shalorus (-175) dominated Will Kerr via strikes in a brief bout. Surprisingly, Kerr – who entered the fight at 7-1 overall – showed absolutely no defense as Shalorus brutalized him from start to finish. In other action, heavy favorite Cub Swanson (-340) almost went the distance before besting John Franchi just before the final bell via guillotine, Ricardo Lamas (-260) and Frank Gomez (-180) posted unanimous decision wins, as did LC Davis (+130) who dominated Diego Nunes. For those who played my recommended WEC 44: Pre-Event Picks, you hit two of three summarized below to cash in. Over the last four events, I’ve hit on 11 of 15 with a decent return as a result.

More winners coming your way – get on over to Bodog – or any of our other recommended sports books – and do something about it!