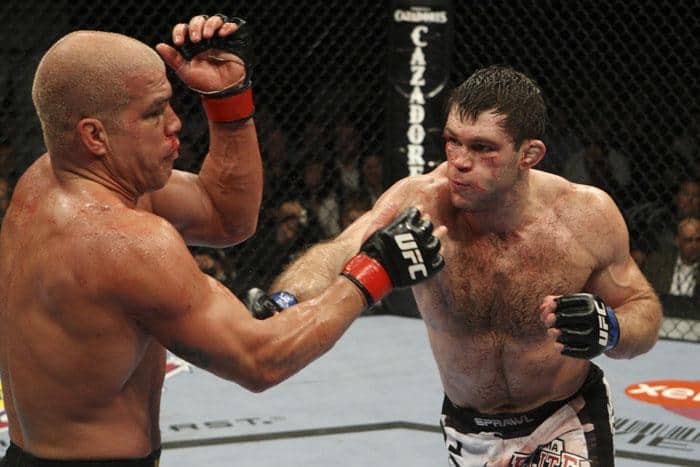 Tired, but, in a good way. I may be nodding off while driving down the road or while sitting in yet another meeting, but you’ll never hear me complain about too much MMA action. Never. Over a 14 day stretch that ends Saturday, there have been four major MMA events (Strikeforce: Fedor vs. Rogers, UFC 105, WEC 44, and UFC 106). Throw in a few Strikeforce Challengers events in the same stretch, and any hardcore fan has to be in heaven. Good times. I’ve been asked to explain to new readers the method behind the madness for my pre-event picks, so here’s a quick refresher. For each major MMA event, I bet a theoretical $500 total on three or four fights. Of course, the amounts that I bet are based upon the actual MMA betting lines from Bodog around the time of my write-up and must add up to be $500 wagered total. Here’s where you come in – you visit our ever-improving site, read my pre-event picks, and cash in if so inclined at Bodog or at any of our other preferred sportsbooks (some with great sign up bonuses now). It’s that simple. Not to crow too loudly, but I’ve been on a nice streak lately. I’ve picked winners in 11 of my last 15, including some nice underdog plays. As a rule of thumb, I usually stay away from huge lines either way – you’ll rarely find me loading up on a -700 favorite or +550 underdog. While that -700 favorite has an awfully strong possibility of winning (at least on paper), the payout will be miniscule unless some serious money is laid down. Conversely, huge underdogs can be tempting with nice payouts, but the MMA oddsmakers are so skilled at setting accurate lines that it’s unlikely that lightening is going to strike often enough to justify consistent big dog plays. UFC 106: Griffin vs. Ortiz 2 is on tap for this weekend, and has some pretty tight lines to consider. With the tight lines, everybody has an opinion why their pick is the winner. Well, here’s my picks.

I’ve gone back and forth on this one a few times. First I was convinced that Johnson’s hand speed and power were too much for Kos. Then, I theorized that Koscheck’s wrestling would allow him to control the fight on the mat and work his way to a decision. Now, I‘ve now come full circle. Anthony Johnson enters the fight 8-2 overall (including winning four of his last six), although his loss to Kevin Burns because of a nasty eye poke should have been a ruled a no-contest. Thus, his only legit loss was via RNC to wily vet Rich Clementi; however, that was over two years ago and most would agree that he’s improved significantly since that fight. His hands are as good as you’ll find at 170 lbs. and he’s always eyeballing the “KO of the Night” bonus on any card. His wrestling is untested, BJJ fairly non-existent, and athleticism is absolutely off the charts. He’s pushing his body’s limit in competing at 170 and as he gets older this will continue to pose problems. Should he win this fight, a greater display of ground skills in upcoming fights may catapult Johnson into the top 3 in the welterweight division. Koscheck enters at the fight at 13-4 (including winning four of his last seven) and has fought elite-level talent in GSP, Thiago Alves, and Diego Sanchez. He’s a talented wrestler by trade, but, as you hear ad nauseum during his fights, he primarily now trains kickboxing now at AKA. Although he’s coming off a dominating performance against Frank Trigg, he was caught with a well-timed uppercut in his upset loss to Paulo Thiago at UFC 95. Therein lies Johnson’s opportunity (and likely path to a win) – catch him standing. If Johnson can avoid the takedown (and that’s a solid if), he’ll control the fight standing and put Koscheck to sleep – regardless of how much Kos is training his standing strikes. Bet $125 to win $100.

Upset special. Cane comes in essentially undefeated at 10-1-1; his lone loss was to an overmatched James Irvin at UFC 79 via DQ (knees to a downed opponent). He’s a well-rounded fighter – he has the Brazilian requisite black belt in BJJ, yet also has very solid Muay Thai. In fact, of his ten wins, eight are by TKO or KO… a bit of an anomaly for any Jiu-Jitsu ace. Outside of the DQ, he’s won three straight since joining the UFC. Antonio Rogerio Nogueira comes into the fight at 17-3, with notable losses to Vladimir Matyushenko, Shogun, and Sokoudjou. This will be his octagon debut, which may in its self cause issues. While he used to be a decision fighter in Pride, he has some recent KO’s and TKO’s to his credit against decent opposition and has even medaled in South American and Pan-Am Games boxing competitions. The betting public seems to agree with me on this one – Cane opened in the neighborhood of +160 and has dropped to +130. I think Cane’s UFC experience and stand-and-trade toughness will allow him to pull something out late in a likely all-standing throw down. Bet $100 to win $130.

I – like several industry insiders that I talk to on a regular basis – think that this has “blow out” written all over it. How can you not like a guy who arguably has the best double leg takedown (with nice ground and pound) in all of the UFC taking on a lanky, 6’6” target with minimal takedown defense? I could drone on about each fighter’ accomplishments, their records in MMA, training camps, etc. but this comes down to Grove’s ability to stop the shot, which is highly unlikely. Unless Grove can catch a lunging Rosholt, look for the wrestler to smother Grove on his way to an easy stoppage. Bet $200 to win $108.

Another upset special. Caol Uno has been around the block… several times. He’s almost as old as me, debuted professionally in 1996, has fought for umpteen organizations, and has an overall record of 27-12-4, including notable UFC battles against Jens Pulver and BJ Penn (twice) years ago. Looking a little worse for the wear lately, he’s lost three of his last four (including a sluggish decision loss to Spencer Fisher at UFC 99), and is now taking on a younger opponent riding a seven fight winning streak. Fabricio Camoes is a second degree BJJ black belt under Royler Gracie, yet has solid strikes, and has found his groove with four straight first round victories. If the fight stays standing, Camoes has the slight edge. If it goes to the ground, Camoes likely has the edge, even though Uno has placed well in ADCC submission wrestling tournaments. In an upset, Camoes via a late submission. Bet $75 to win $142.