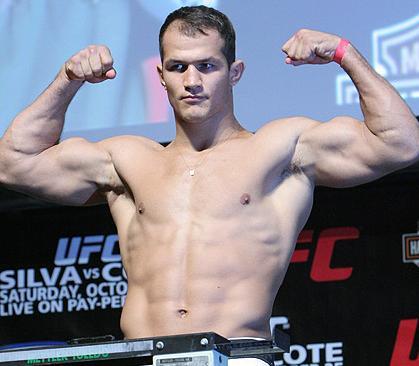 Junior ‘Cigano’ dos Santos will be fighting Gilbert ‘The Hurricane’ Yvel. Junior dos Santos will face off with the Dutch knockout artist, Gilbert Yvel, on January 2 at UFC 108.

Junior dos Santos, a Brazilian mixed martial artist, and a Brazilian Heavyweight Kickboxing Champion with an incredible 18-0 record; made his UFC fighting debut during UFC 90 beating Febricio Werdum by KO. He has steadily been building his name as a top heavyweight with heavy hands, as he has TKO’ed up and comer Stefan Struve and Mixed Martial Arts legend Mirko ‘Cro Cop’ Filipovic.

Gibert Yvel, a defensve muay thai striker, has a MMA record consisting of 51 fights and a record of 36 wins, 13 losses, 1 draw and 1 no contest. Known for his signature move, “the flying knee”, Yvel has a a reputation for poor sportsmanship and bad conduct, most recently known for an incident in 2004 where Yvel punched a referee in the head and kicked him after the ref had hit the ground.

With the knowledge of Gilbert Yvel’s known muay thai fighting style, dos Santos was quoted as saying, “I think that his weak spot is the ground,” and has been training with PRIDE and UFC legends, Antonio Rodrigo Nogueira and Antonio Rogerio Nogueira, on his ground game. Dos Santos also stated “It’s gonna be a great fight, and if he’s prepared it’s gonna be a war, because I’m with Rogério training with Bahia’s fighters. I’ll be prepared for this fight. We never know how it’s gonna end, but I’ll try the knock out, that’s what I like to do. I’ll exchange with him”.

This is going to be an excellent fight. Both fighters are known Knockout Artists, so we may see a truly epic fight between these heavy-handed heavyweights.