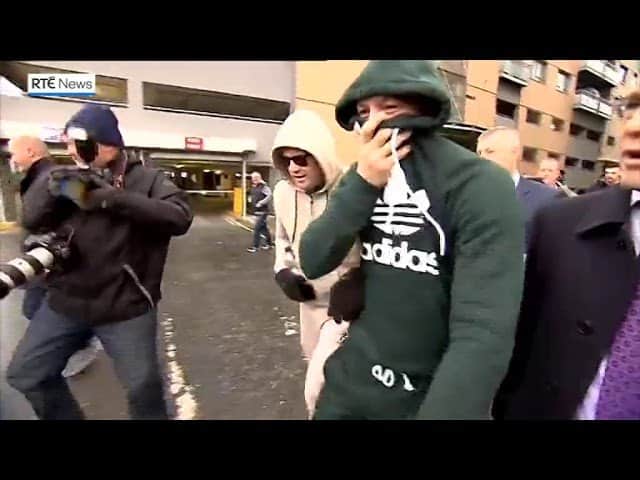 While his links to members/former members of the Kinahan cartel are questionable, McGregor did no favors in rubbishing the claims of his involvement in the incident earlier this week.

Independent.ie, the Irish news source who published the story about a famous ‘Irish Celebrity’ being caught up in an altercation in a Dublin bar, stopped short of naming the ‘celebrity’ as Conor McGregor. Hours later, Conor McGregor took to Instagram seemingly naming himself as “The Celebrity”, however:

McGregor uploaded the video above, which clearly shows him concealing his face in a manner reminiscent of another infamous Irish gangster who was slain in 1994. “The General”, real name Martin Cahill, was murdered by the Provisional IRA due to his alleged involvement with Loyalist Paramilitaries. Cahill became somewhat of a celebrity in Ireland due to his humorous interviews outside of court and his ingenious methods of eluding charges brought against him by the Irish judicial system.

McGregor, replicating Cahill’s trademark method of concealing his face when faced with news cameras, strolled to his car following a court hearing in Dublin yesterday to answer a speeding fine:

RTÉ crime correspondent Paul Reynolds claimed that McGregor “arrived in rather dramatic fashion in a two-door BMW sportscar which he abandoned outside the building.” There was also allegedly some discussion that McGregor’s car would be clamped but this was decided against. McGregor was in a buoyant and light-hearted mood throughout the court appearance before speeding off home, despite having attended to answer a speeding charge. McGregor was fined €400 for the infraction.

McGregor was clearly unperturbed by the news that his life ‘may be in danger’. Irish investigative crime reporter Paul Williams made claims on Newstalk Breakfast, where he serves as co-host. Williams, despite being regarded as somewhat of a sensationalist in the country, made a chilling assessment of McGregor’s current predicament:

“This is really serious, and I’m wearing my old veteran crime reporter hat here. Conor McGregor is potentially in very, very serious danger – I’ve heard that from my sources, and just looking at the lay of the land currently. I think it’s incredibly unprecedented.

“He has ended up crossing swords, accidentally or whatever, with some very heavy people. Or some people who are related to some very, very heavy people that could pose a serious threat to his safety and maybe even his life – and I don’t say that lightly. I think it’s unprecedented that an international sporting icon could be found to be dragged down by organized crime in this country.

Williams also claimed that An Garda Síochána will be notifying McGregor of the danger:

“I think it’s extraordinary. And I think in the next 24-48 hours, I believe that An Garda Síochána will be approaching Conor McGregor and saying to him, ‘By the way, we just want to officially inform you that potentially your safety is at risk.’

“I think it’s an extraordinary state of affairs. And watch this space.”

McGregor’s father, Tony, hit out at the claims that his son is the subject of a €900,000 bounty by dismissing talk of the danger as ‘nonsense’:

“That’s all nonsense, that is. Absolute nonsense. It’s an absolute nonsense story. It’s grown legs and it’s getting that ridiculous – it’s become funny. We have nothing to fear here whatsoever. There’s no one after us for anything.