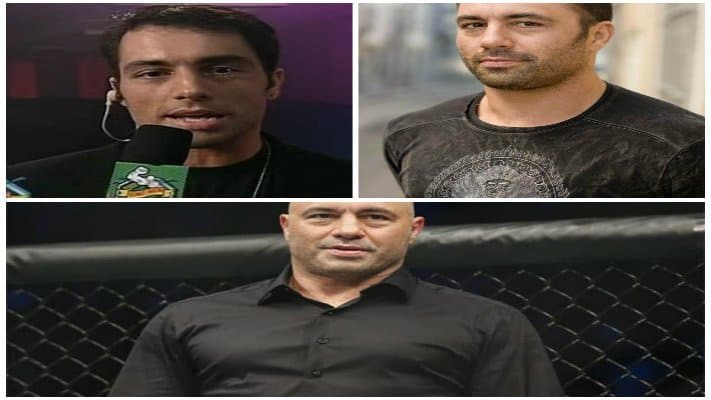 UFC color commentator, podcast supremo, stand-up comedian and general bad ass, Joe Rogan, has baffled many for years. This is due to the fact that no human being can reasonably do so much with just one life

MMAFullContact can reveal that, due to insider information passed to us in a dark parking lot in the middle of the night, we can finally reveal the truth:

Joe Rogan the comedian, Joe Rogan the UFC color commentator, and Joe Rogan the podcast innovator all operate from three different forms. Other endeavors, such as Rogan’s public appearances and personal interests, are shared between the three men.

Raised in Boston, Massachusetts, the original Rogan made his first foray into the world of stand-up comedy in Boston towards the end of the 1990’s. In 1995, Rogan 1 was cast as handyman Joe Girelli on NBC sitcom News Radio, which aired until 1999. Following this, Rogan became the host of the massive TV hit Fear Factor which was aired for six seasons from 2001.

Rogan (the original one) joined the UFC as a backstage and post-fight interviewer at UFC 12: Judgement Day in Dothan, Alabama on February 7, 1997. He quit two years later as his salary was insufficient to get him from location to location. When Zuffa took over the UFC in 2001, Dana White offered Rogan the gig he still has today, which the Boston-native eventually took up in exchange for tickets, before accepting a salary.

In his past, Rogan was a Tae Kwon Do champion and also holds a black belt in Brazilian Jiu-Jitsu. The Joe Rogan Experience, in 2009, was Rogan’s brainchild for an intellectual but laid back discussion forum before he hosted Joe Rogan Questions Everything, which aired for a total of 13 episodes. The Joe Rogan Experience is among the most popular podcasts on earth, and Rogan balances this and all of his other interests seemingly with ease.

That is because he has help in the form of two “assistants” who take over duties when he is inundated with work.

In documents which may or may not have been obtained by some guy somewhere, MMAFullContact read that Rogan hired a lookalike by the name of Pierluigi Immobile in 2007, who was a bodybuilder from Napoli. Rogan, stunned by his resemblance to Immobile, immediately began to train him in how to perform stand up comedy and call fights. According to the documents, Immobile was a natural and took to both like a duck to water.

Close friends of Rogan were allegedly made aware of what was happening and took Immobile under their respective wings. However, things did not go as smoothly as planned. Immobile, it turned out, had a compulsive gambling habit, and would often disappear for days on end, trawling the casinos of Las Vegas and beyond. Rogan was forced to kick his ass and ended up getting him in a guillotine on a blackjack table in one of the top casinos in Vegas following a UFC event in 2009. Immobile, embarrassed by this, got his act together and eventually took over the Joe Rogan Experience in 2012.

Arthur Winchester, or “Rogan 3” as he is known, is probably the more interesting of the “Rogan Clones”. Born in Surrey, England in 1956, Winchester started his professional life off as an actor with a penchant for comedy. Rogan, on the word of a good friend in the USA, learned of the similar stature and dark looks of Winchester and decided to kidnap him and programme the Englishman into a clone to do his bidding as a stand-up comedian.

By 2011, Winchester was ready to emerge from Rogan’s “Cryogenic chamber” (which was, in fact, a makeshift brainwashing lab). Winchester, who had a full head of hair and discernible English accent, now donned a shaved head and American tongue. Having written and performed Rogan’s stand up shows since 2011, “Rogan 3” then disappeared while hunting with the original Rogan, and has not been seen since.

There are many rumors pertaining to the clone’s experience, with some believing that the original Rogan was pissed with Winchester’s work on his Netflix special Triggered in 2016.

For years, many have been dumbfounded as to how one man could possibly do so much with just one life. Little did we know that the genius mind of Rogan had a little helping hand…