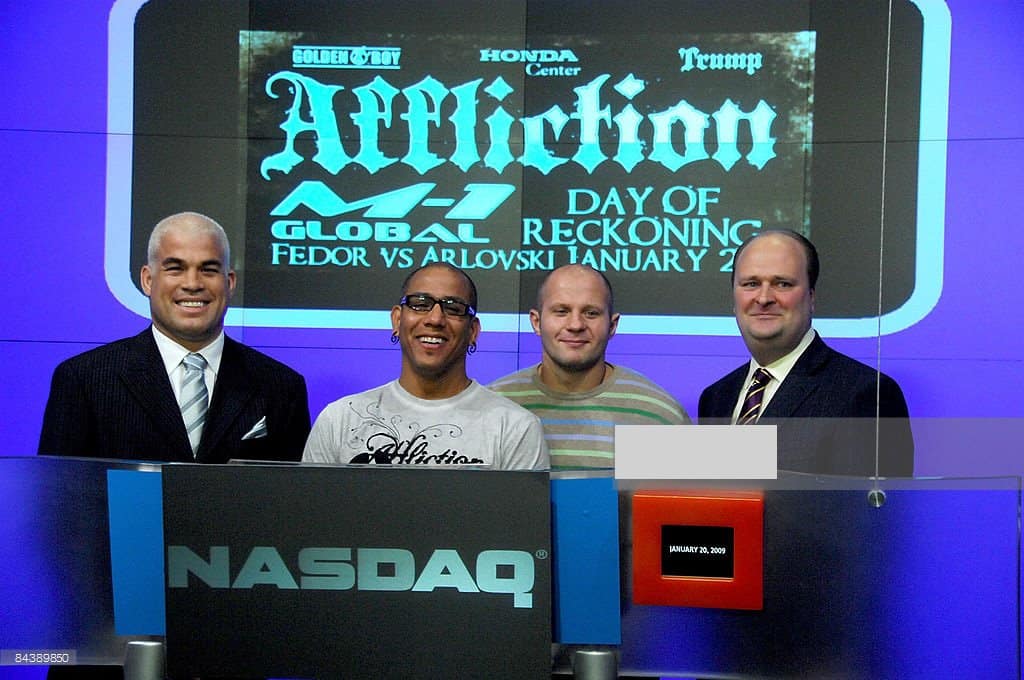 MMA promoter based in United States

In July 2009, Affliction announced that it would exit the fight promotion business and that Affliction Clothing would become a UFC sponsor.[1]

Affliction Entertainment promoted two pay-per-view (PPV) MMA events. The third (Trilogy) was scheduled for August 1, 2009, but was canceled July 24, 2009 due to Josh Barnett testing positive in the pre-screening drug test. On July 24, 2009 it was announced that Affliction had folded their MMA Promotion and would sponsor the UFC once again.[6][7]

Affliction: Trilogy was to feature a fight between Fedor Emelianenko and Josh Barnett as its headline event at the Honda Center in Anaheim, California on August 1, 2009.[15][16] On July 22, 11 days before the scheduled event, the California State Athletic Commission announced it would not license Barnett because he tested positive for a banned substance.[17] Later that day, the CSAC issued a press release which stated that anabolic steroids was the substance detected in Barnett's drug test.[18]

Many of the fighters on the card were able to find another promotion to work for shortly after Affliction Entertainment's demise. The Renato Sobral vs. Gegard Mousasi bout was moved to Strikeforce: Carano vs. Cyborg for Sobral's Light Heavyweight Title,[19] while Jay Hieron fought Jesse Taylor on the same card.[20] Zuffa also picked up several fighters with the LC Davis vs. Javier Vasquez bout being moved to WEC 42, the Mark Hominick vs. Deividas Taurosevicius bout being moved to WEC 43, the Ben Rothwell vs. Chase Gormley bout moved to UFC 104 and Vitor Belfort main eventing UFC 103. As well Paul Daley, Dan Lauzon, and Rafaello Oliveira have signed contracts with Zuffa.[21]

The vs. Rob Broughton bout was moved to M-1 Global Presents Breakthrough.[22] While Lucio Linhares from the other M-1 Global bout was also moved to the card, with a new opponent, he ended up fighting Mikhail Zayats.[23]