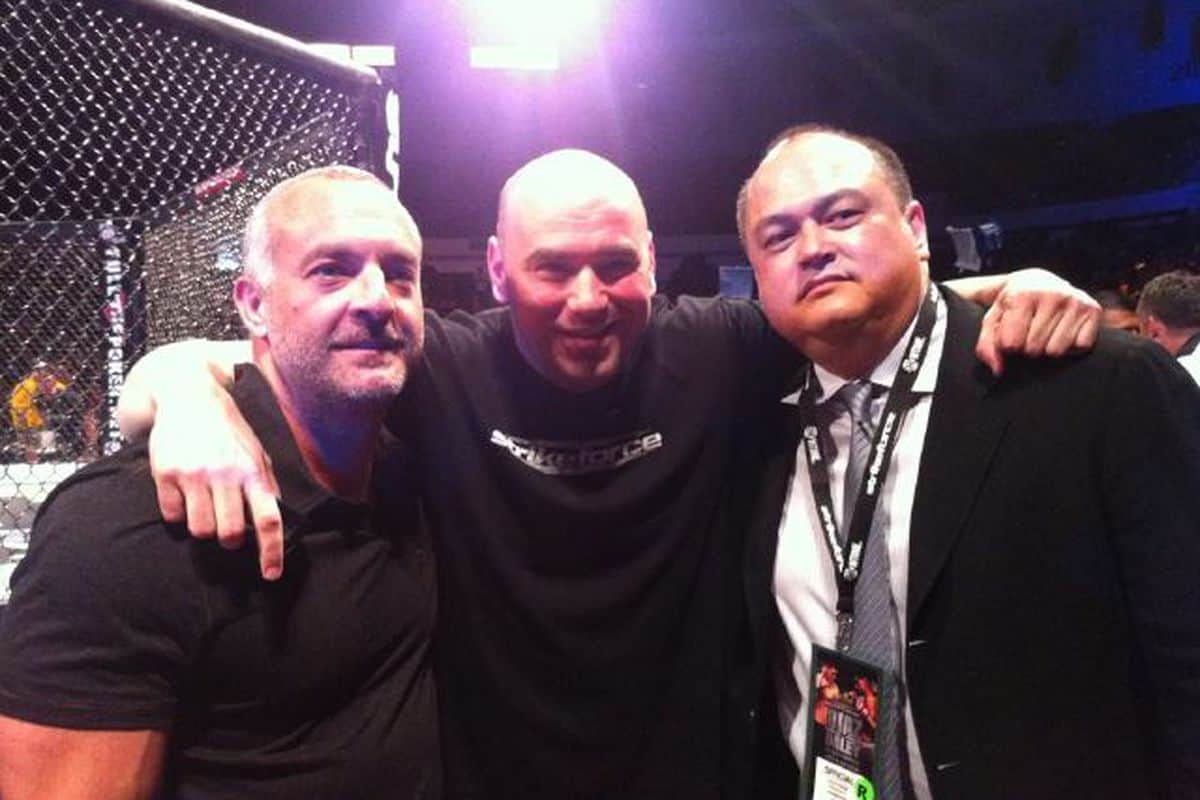 This article is about the mixed martial arts promotion. For other uses of "strikeforce" and "strike force", see Strike Force.
MMA promoter based in San Jose, California

Strikeforce was an American mixed martial arts and kickboxing organization based in San Jose, California which operated from 1985 to 2013. It was headed by CEO Scott Coker. Its live events and competitions have been shown on CBS (debut on November 7, 2009) and Showtime in the United States, Super Channel in Canada, Primetime in the United Kingdom, SKY PerfecTV! in Japan, HBO Plus in Brazil, Space in Latin America and the Caribbean, and on the American Forces Network.

In early 2011, Strikeforce was purchased by American Ultimate Fighting Championship owner Zuffa LLC, which eventually closed the promotion and brought the remaining fighter contracts into the UFC roster.

Founded as a kickboxing organization, Strikeforce later became the number-two mixed martial arts promotion in the world. Its first MMA event, Strikeforce: Shamrock vs. Gracie, was held on March 10, 2006, at the HP Pavilion in San Jose, California.[1] The event was California's first regulated MMA event and broke the previous record for largest audience at a MMA event in North America, with its 18,265 in attendance. The record was since broken by UFC 129.

In February 2008, Strikeforce, in conjunction with Brian Halquist Productions,[2] held its first event outside California with Strikeforce: At The Dome at the Tacoma Dome in Tacoma, Washington. Starting in 2009, most Strikeforce events were held in other states (15 in total), including 5 events in Las Vegas, Nevada from 2011-2012.

In March 2008, Strikeforce partnered with NBC to broadcast weekly highlight and fighter-profile series, Strikeforce on NBC from April 12.[3] In February 2009, Strikeforce purchased several assets, including a video library and several fighter-contracts, including Nick Diaz, Jake Shields, Robbie Lawler and Scott Smith from ProElite, owner of the defunct EliteXC promotion. Days later it also announced it had agreed to a three-year broadcast deal with Showtime for up to 16 events per year, as well as a deal with CBS for an option to produce up to four events for them.[4] In addition to Strikeforce's primary events being broadcast on Showtime, it also announced it would produce ShoMMA: Strikeforce Challengers, an event-series similar to ShoXC and ShoBox, where they would highlight up-and-coming fighters.[5]

During August 2009, Strikeforce CEO Scott Coker announced that they had signed formal alliances with Japanese MMA-promotion Dream and Russian promotion M-1 Global. Coker said the partnership would allow for co-promotion and fighter exchanges for events both in the US and Japan to creating the best match ups possible that would not have existed before.[6] As a result, Dream fighters such as Shinya Aoki, Tatsuya Kawajiri, Sergei Kharitonov, Melvin Manhoef, Jason Miller, Gegard Mousasi, Ronaldo Souza, Hiroyuki Takaya, and Marius Zaromskis competed in Strikeforce between 2009 & the partnership's end in 2011.

On August 15, 2009, Strikeforce was available to be viewed online through the Showtime website. For a small cost, an online interactive event named "Strikeforce: All Access" could be streamed simultaneously with the live event, enabling the user multiple camera angles of the fights such as the "cage cam" exclusively offered by Showtime. A small camera was attached to the referee and fans were able to see from their perspective in real time. "Strikeforce: All Access" added other features such as pause and instant replay. This was not the first time Strikeforce events were streamed on the Showtime website but was the first time the live stream was available to audiences and internet users outside the United States.[7]

On August 3, 2009, former Pride and reigning WAMMA Heavyweight Champion Fedor Emelianenko signed a 3-fight contract with Strikeforce, with events he competed on co-promoted by his promotional team M-1 Global.[8] On November 7, 2009, he made his Strikeforce debut at Strikeforce: Fedor vs. Rogers on the promotion's first nationally televised card on CBS. Emelianenko faced Brett Rogers, and won via knockout in the 2nd round. Emelianenko proved to be a huge rating draw, bringing in just under 5.5 million viewers.[9]

Emelianenko's next fight was at Strikeforce: Fedor vs. Werdum, where he suffered his first loss in 10 years to Fabrício Werdum via submission. Emelianenko next fought as part of the Strikeforce Heavyweight World Grand Prix Tournament,[10] losing again to Antônio Silva via doctor stoppage. Emelianenko was battered by Silva during the second round, causing his right eye to swell shut.[11]

After exiting the tournament, Emelianenko last competed against Strikeforce light heavyweight champion Dan Henderson in a heavyweight superfight, losing via first-round knockout. After the loss, Emelianenko left the promotion to finish his career overseas. Despite his 3 fight losing streak to end his Strikeforce run, all of his appearances for the promotion attracted over 500,000 viewers, among the highest ratings in Strikeforce's history.[12]

On March 12, 2011, Dana White revealed on AOL to Ariel Helwani that Zuffa, LLC, the parent company of the UFC, had purchased Strikeforce.[13] White went on to explain that Strikeforce will operate as an independent promotion, and that Scott Coker will continue to run the promotion. Strikeforce CEO Scott Coker announced the return of Fedor Emelianenko on an unspecified July or August event and said that the Zuffa-owned company would continue to co-promote with M-1 Global.[14] Following the purchase, the UFC signed many of Strikeforce's top stars and champions, such as Jason Miller, Nick Diaz, Dan Henderson, Alistair Overeem, Luke Rockhold, and Cung Le.

Under Zuffa's ownership, Strikeforce made a number of changes, including reinstating elbow strikes previously barred in Strikeforce, dissolving the men's weight classes below lightweight, and ceasing promotion of amateur undercard bouts. After an extension was reached to continue Strikeforce through 2012, the promotion's heavyweight division (sans Heavyweight Grand Prix finalists) was merged into the UFC, and the promotion's Challengers series was ended.

The final Strikeforce show was Strikeforce: Marquardt vs. Saffiedine on January 12, 2013, after which the promotion was dissolved and all fighter contracts were either ended or absorbed into the UFC. Notable fighters included Daniel Cormier, Josh Barnett, Ronda Rousey and Luke Rockhold. Following a brief period away from fight promotion, former Strikeforce CEO Scott Coker would then go on to join Bellator MMA in June 2014, replacing Bjorn Rebney as its new president.[15] 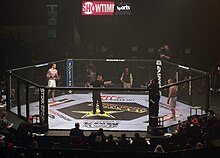 Two fighters get ready prior to their bout

At the time of its closure, Strikeforce employed the Unified Rules of Mixed Martial Arts, and was fought on a hexagonal cage, as opposed to UFC's octagonal cage (The Octagon). Ordinary matches consisted of three five-minute rounds, while championship matches were five five-minute rounds. All rounds had a one-minute break between them. Prior to the acquisition by Zuffa, Strikeforce did not allow elbows to the head of a grounded opponent.

The ten-point must system was in effect for all fights; three judges scored each round and the winner of each received ten points, the loser nine points or fewer. If the round was even, both fighters received ten points. In New Jersey, the fewest points a fighter could receive was 7, and in other states by custom no fighter received fewer than 8.

As of Strikeforce: Marquardt vs. Saffiedine, which occurred on January 12, 2013, there have been 63 Strikeforce events held, including 20 in the promotion's Challengers series.

Figures were available from the company Round 5.[17] A series of their figures includes Cung Le and Gina Carano. The Cung Le figure was released at the 2009 San Diego Comic Convention. An exclusive special version of the Cung Le figurine was released thereafter in which he has different colored shorts and design.