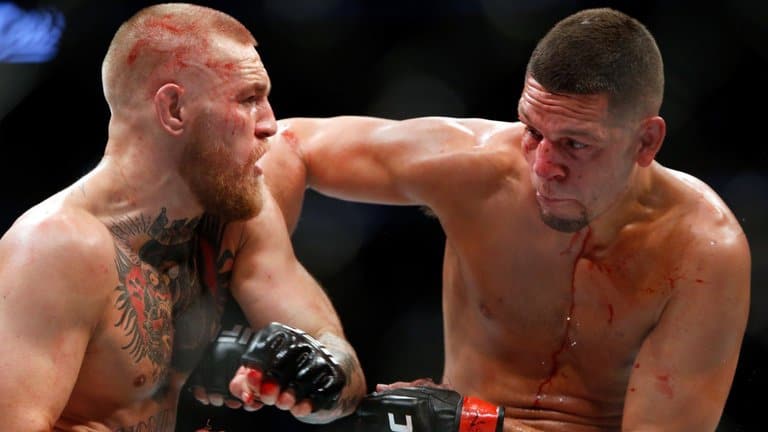 2016 was more than just a year for Nate Diaz: It was the advent of a period which would transform his life and career forever

As we approach the end of the summer of 2017, it is looking very likely that we will go more than a year without seeing Nate Diaz fight.

Having made a small fortune off the back of two fights with UFC megastar and pay-per-view king Conor McGregor, Diaz, for once, did not have to fight in order to sustain a lifestyle. The 32-year-old lightweight is content to enjoy a break away from the octagon while pursuing other interests, including his love of triathlons. With no wolves at the door and a license to enjoy life following years of warfare inside the octagon, no one can blame the Stockton native for suiting himself.

Things were not always as rosy for the Cesar Gracie black belt, however. While Diaz had enjoyed a year off from the sport following a catchweight bout defeat to Rafael Dos Anjos in Dec. 2014, the necessity to make bank meant a return to the promotion was warranted. Diaz came back in style, comprehensively beating 155-pound stalwart Michael Johnson via unanimous decision, earning a Fight of the Night bonus as a result. Diaz’s octagon interview that night is now the stuff of legend due to his call out of UFC featherweight champion Conor McGregor.

As 2016 ushered in a new year for the UFC, Diaz was a fighter who had put in one of the performances of his career against a tough competitor in Johnson. Despite having accused Conor McGregor of taking “everything” he had “worked for”, his future was still unclear. While “The Notorious” saw his stock and bank balance already in the millions catapult off the back of knocking out former 145-pound, dominant champion Jose Aldo, Diaz was living off the rumored $40,000 check he received for beating Johnson. And then, in February of that year, everything would change forever…

McGregor was set to face lightweight champion Rafael Dos Anjos in order to attempt to become the first fighter in UFC history to reign over two weight classes simultaneously. Less than two weeks before the fight, the Brazilian was injured and the promotion scrambled to find a replacement for the UFC 196 headline fight. Diaz got a call while allegedly on vacation in Mexico offering him the bout and he accepted. The fight was signed and sealed to be fought at welterweight.

By the time UFC 196 had rolled around, fans were still getting used to the bulkier frame of McGregor. The Irishman had claimed that he had never felt better and relentlessly tore into Diaz in the media appearances and press conferences before the fight. Given the support McGregor had behind him and his exploits over Aldo at UFC 194, bookmakers made him a strong favorite to win the bout. Diaz, having endured the wrath of the Dublin native’s tongue in the days leading up to the fight, had other plans.

When the Stockton-native called McGregor out following the bout with Johnson just months prior, there were not many who would have bet it would happen. As the UFC 196 main event came around, both men were stood in front of each other.

McGregor threw heavy shots at Diaz and looked extremely comfortable, opening up the face of his opponent through scar tissue. Diaz, regardless, hung in there and allowed “The Notorious” to tire himself out, hitting the SBG Ireland star with trademark “Stockton Slaps” and humiliating the tiring Dubliner who was looking dangerously fatigued. McGregor, who could not deal with the volume of heavy shots coming his way, desperately shot to take Diaz down (an unfathomable mistake) and was immediately rewarded with some big shots to the face as Diaz mounted. The Irishman turned away, giving his back to the Brazilian Jiu Jitsu black belt and was submitted by rear naked choke.

Suddenly, things were a whole lot different. Diaz had pocketed an estimated $500,000 for the bout, with a Performance of the Night bonus and a priceless ton of credibility and fame in the process. Asked by Joe Rogan to articulate how he felt at ‘shaking up the world’ in his octagon interview, Diaz replied with the legendary words “I’m not surprised, motherf**kers”.

There were certainly many who were surprised at the result. The Conor McGregor hype train had been derailed in spectacular circumstances by a man who was deemed to be nothing but an also ran by the UFC top brass The promotion’s president, Dana White, had previously remarked that Diaz did not have the appeal or style which would shift pay-per-views and make him a star. Following the conclusion of UFC 196, Diaz, one of the darlings of hardcore MMA fans, was now at superstar status. More than this, the Stockton son held all the cards for the first time in his career and would have things on his terms when the expected call came for a rematch with McGregor.

Diaz despite losing on the judges’ cards the second time around by a hair’s breadth to McGregor at UFC 202 in August of the same year, made an estimated $2 million dollars plus from the fight. Diaz’s star rose even higher, despite the victory, and is in pole position to meet McGregor in a multi-million dollar “rubber match” shoudl the UFC lightweight champion return to the promotion. More than this, Diaz would have the opprtunity to take McGregor’s strap from him.

What a difference a year can make.