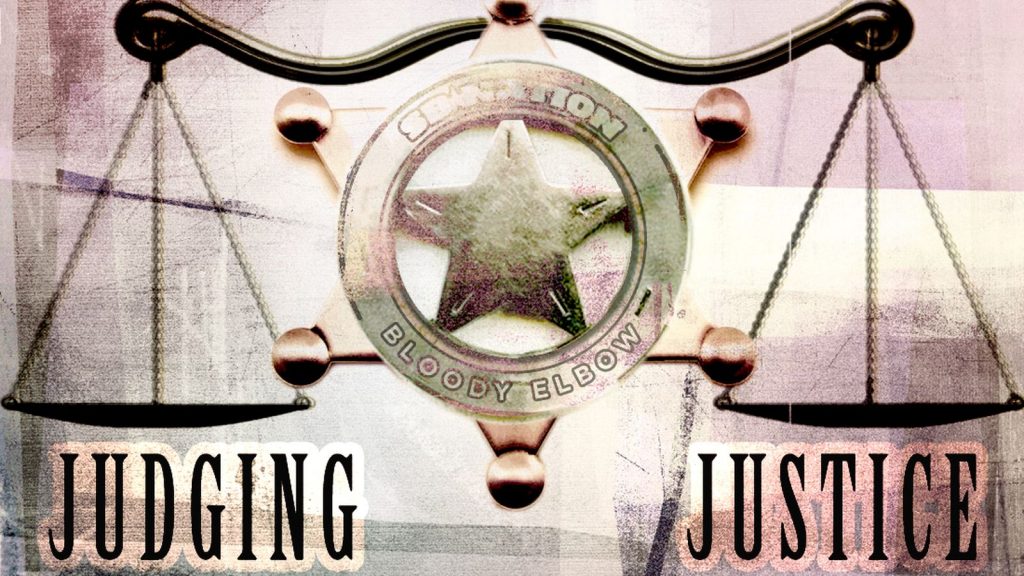 Contributor: Joe Stewart. Okay, we get it, judging in MMA has always been terrible. Anybody who failed to realize this now knows after Saturday’s fight between Lyoto Machida and Shogun. It’s one thing when I personally think the fight could have gone either way, though, when I watch a fight half a dozen times (sound on, sound off, doesn’t matter) and my personal opinion is still the same, I tend to believe someone got screwed over. And this isn’t just a screw over; this is probably the biggest judging f*ck up in the history of any combat sport. Yes, I said it. Bigger than Ricco vs. Big Nog, bigger than Bisping vs. Hamill. Hell, I’ll go so far as to say it’s far worse than any Olympic boxing judging, which tells you something considering how obviously bad Olympic boxing judging has always been. This was, in my opinion, so bad that I had no will to even talk about it or to even watch the sport any longer. After all of that I turned off the television, sat in shock for a good hour thinking…..what the hell just happened? Heck, I didn’t even stay up and watch Dream 12 because of the bad taste that was left in my mouth. And this is coming from a guy who’s never missed a Dream event or, more importantly, a UFC event in nearly a decade. THAT bad.

Cecil Peoples took it upon himself to state why he scored the fight the way he did. Which, you know, you only do if you have something to prove, which is that Cecil has been known to be a horrible judge for years. In fact, it’s a mystery how the guy can keep his job after all the f*ck ups he’s been involved in. So let’s break his statements down one horrible quote at a time.

“First of all what you need to understand is that from where the judges are sitting, we get to see things that the fans at home may miss.”

I’d believe this if there weren’t sixteen thousand fans in attendance that, at the beginning of the fight, were all cheering Machida and booing Shogun. Post fight, it went into reverse. Not to mention Dana White, who has the best seat in the house, also believes you f*cked up. And not only f*cked up, but f*cked up so bad that they are having a immediate rematch, something the UFC rarely does, let alone do for two non-American fighters. So explain to me how everybody in the crowd and everybody sitting feet away from the fight can all be wrong? Why were Joe Rogan and Mike Goldberg already calling for Shogun vs. Anderson Silva? Why did ESPN put up a headline saying Shogun gets decision win over Machida even before the winner was announced (you know, apart from pulling the trigger a little too early)? Yet, a guy that has been known to f*ck up all the time is trying to explain to us why he scored the way he did. Get real. Better yet, get a new job.

“Mauricio Rua was being aggressive but it wasn’t effective aggressiveness which is what we as the judges look for when scoring a fight.”

Are you really trying to tell me Machida was being more aggressive than Shogun… the guy that spent most of the time running out of the corner to avoid taking any damage? The guy that would flinch every time he was hit? What the hell is the difference between aggressive and effective aggressiveness? If one guy isn’t being aggressive and the other guy is, I don’t care if it’s not effective you reward points to the guy pushing the pace.

“You have to keep in mind we always the favor the fighter who is trying to finish the fight, and leg kicks certainly don’t do that.”

This statement should get your license pulled on the spot. Bas Rutten vs. Warpath, Keith Jardine vs. Kerry Schall, Pat Barry vs. Dan Evanson, Brandon Vera vs. Mike Patt, Pete Spratt vs. Robbie Lawler, etc. And if they aren’t finishing fights, they can be fight changing, as seen in the Rampage vs. Griffin fight. You want to talk about effective striking, well you can start with leg kicks, you moron. What’s next, elbows don’t finish fights, so don’t even pay attention to that large cut on a guy’s forehead?

“When both fighters are engaged in a striking match, what I always look for is the fighter who is being judicious, picking his spots, being accurate and landing the cleaner strikes which ultimately is what Lyoto did more effectively than Rua.”

Yeah, tell that to the cut on Lyoto’s nose and lip, both of his legs which were red, and his midsection.

“I’m just glad the other judges on the panel saw it the same way and I’m sure the fans who understand the technicalities of the sport agree with the decision too.”

I have yet to hear anybody intelligent in the media or on the Internet agree with you or any of the other judges. And yes, I am calling Kevin Iole a moron. I didn’t hear any of the sixteen thousand fans in attendance agree with you. I didn’t hear respected fighters like Rampage and Forrest Griffin agreeing with you, or Dana White for that matter. So I guess only three people and a bunch of e-trolls understand the technicalities of the sport. Maybe you geniuses can help us all out and explain the technicalities, because clearly only but a handful of people have any idea what they are.

A few other points I’d like to put out there. First off, I don’t believe in the saying “to be the champ you have to beat the champ”. It’s been by far the worst saying in combat sports for decades. If a guy wins a fight, he wins the fight. I don’t care if he knocks him out or if he beats on him for 25 minutes, the better fighter should walk out with the belt that night.

Another saying that I’m really getting tired of is this “don’t leave the fight in the judge’s hands”. The only reason that saying was ever said was because of how bad judges normally are. We wouldn’t have this problem if we could find a group of competent judges who could do what they are paid to do.

Finally, I’d just like to point this out to all of my fellow knuckle warriors on the Internet. This has nothing to do with the UFC and it has nothing to do with the California State Athletic Commission, as funny as that seems because they’ve been known to be corrupt for years. The fact is the CSAC and other athletic commissions pay these people to do consistent work. I suppose you could blame them for not firing the incompetent judges, but at the same time, people are getting paid to do this. A job many of us would die for just because we love this sport bad enough. So it wouldn’t hurt to stop all the bullsh*t and either go back to school or find a new job entirely.