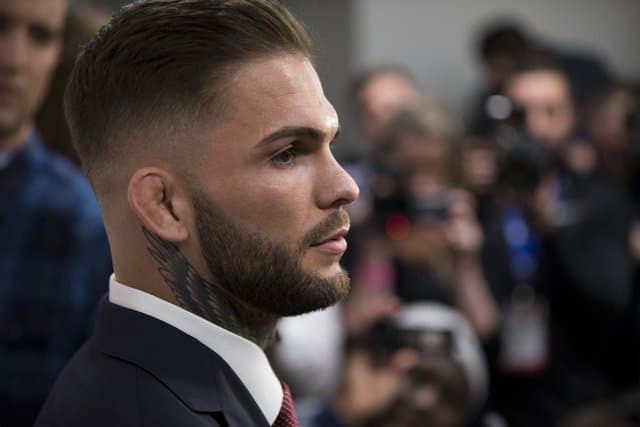 TJ Dillashaw, his ex-Team Alpha Male (TAM) teammate, and former 135-pound title holder makes up the other half, yet you more than likely know this.

Having starred opposite one another as coaches on TUF: Redemption earlier this year, a showdown between both men was scrapped on account of Garbrandt’s injury woes. At UFC 217, “No Love” will make the first defense of his title against Dillashaw in what is expected to be one of the greatest bantamweight bouts in recent memory. The bitterness, rivalry and genuine disdain for one another will make this an unmissable bout and likely provide fans with a potential fight of the year candidate.

The history between both men is widely known in the MMA community. Dillashaw, having been a close friend and protege of Team Alpa Male patriarch Urijah Faber, jumped sticks with one time TAM coach Duane Ludwig in controversial fashion. Garbrandt, who has spoken out in the past about Dillashaw’s ultra-competitive and bullying nature as a former teammate also claimed to have footage of him knocking out Dillashaw which he had threatened to release on numerous occasions.

The theatrics hit their peak when both men appeared on TUF, with the two almost coming to blows on a number of occasions. Garbrandt recently opened up to FloCombat on Dillashaw and more specifically, the genuine hatred which he holds for his former training partner and friend:

“Sometimes there’s negativity and there are cancers that are surrounding anything in your life, you’ve got to cut that out,” Garbrandt said. “That’s what we [Team Alpha Male] did. TJ [Dillashaw] left and we cut that out and whoever else followed, we cut the cancer out. Honestly, he was a fierce competitor. He liked to compete.

He didn’t like to give an inch. With that said, he was willing to cheat at any cost to win…a round, anything, willing to [take a] cheap shot. He’s a cheap-shotting bastard. I don’t stand for that, especially with your teammates. That’s what it is. I lost respect for him after seeing truly who he was in the room amongst his friends.”

“[Duane Ludiwg] used the team for a platform to build his own ‘Bang Muay Thai’ system and TJ followed suit. They’re easily manipulated those two. They’re like two peas in a pod. Duane’s hanging off TJ’s nut sack just to promote his ‘Bang Muay Thai’ system. TJ is using him just as a mitt holder and doesn’t even want to pay him. They’ve got their own things going on. They’re cut from the same cloth.”

Garbrandt is fiercely loyal to the Team Alpha Male banner and more specifically, Urijah Faber, who he frequently credits as the driving force behind his ascent to the top of the tree in the UFC. Having been unranked at the beginning of 2016, “No Love” shocked Dominick Cruz at UFC 207 in December, beating the all-time great with a ruthless and flamboyant masterclass to take the bantamweight strap.

For Garbrandt, however, there is more to glory and the financial gains which come as part of being a champion. Dillashaw, who lost the title he took from Dominick Cruz following his departure Team Alpha Male in 2016, is, according to Garbrant, a “prostitute” who has no loyalty. Having burned bridges and clearly lost the respect of his former peers, Dillashaw, Garbrandt argues, is a pariah in the MMA world:

“They’re both ‘What can we get out of this situation?’ It’s always money with them. That’s why they’ve been in the position they’ve been in. Duane’s selling peanut butter just to make it by cause he burns every bridge. TJ’s bouncing around from gym to gym like a prostitute on the corner, trying to find training partners and coaches, cause his loyalty’s not there.”

At UFC 217, both men will aim to settle the score in the only way they know how. Should it be a landslide victory for either man, or a closely contested war, there is no doubt that this saga will end at the final bell, however.