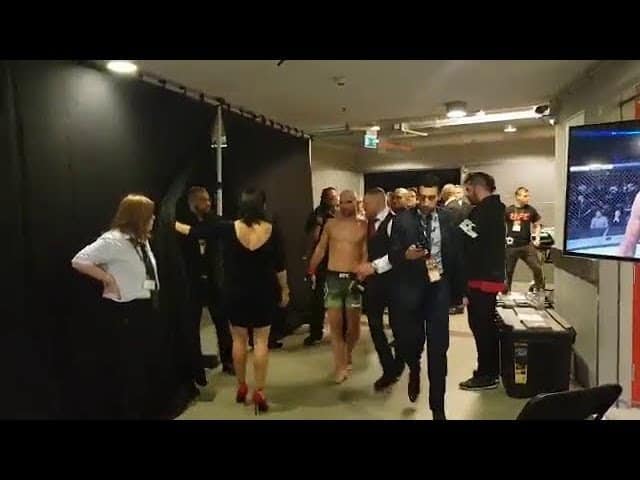 UFC lightweight champion Conor McGregor has once again attracted criticism for his choice of language following the promotion’s visit to Gdansk, Poland

The 29-year-old was captured discussing the outcome of teammate Artem Lobov’s loss to Andre Fili.

McGregor appeared to be expressing his disappointment for Lobov following his loss and clearly used the word “f*ggot” no less than three times. It appears that the term was used with reference to Fili.

It is highly doubtful that McGregor was revealing any bigoted side to his personality with the regrettable remarks, given the fact that he proudly displayed his pro-same-sex marriage stance in conjunction with a referendum on gay marriage in Ireland in 2015. McGregor also used his celebrity status to encourage others to vote in favor of the change in the law which allowed members of the same sex to wed:

“We all deserve equal rights,” McGregor said at the time. “We’re all human here at the end of the day — regardless of color, gender, sexuality. Any of that. It’s all meaningless. We all deserve the same rights. It just feels right to me.”

Myself and my team are urging everyone to please VOTE YES TO EQUALITY! Every human deserves equal rights #WeAreAllOne pic.twitter.com/PbyTXNHzKQ

McGregor’s mouth has landed him in hot water on a number of occasions in the past. Prior to his first bout with Nate Diaz at UFC 196, the Irishman referred to his opponent as a “Cholo gangster from the hood” – an unmistakeble swipe at Diaz’s Mexican heritage. While this remark was brushed off, there were many observers who expressed offense at the term.

Prior to his bout with Floyd Mayweather Jr. in August, McGregor used the term “dance for me, boy” and caused outrage for what was perceived as a direct assault on Mayweather’s African American heritage. While McGregor vehemently denied any intent behind the term, Mayweather later revealed that it was received negatively. McGregor attempted to lighten the mood in Brooklyn, New York by claiming that he was “black from the waist down”. Mayweather was far from impressed:

“Racism still exists. It’s all about treating people like you want to be treated. To get respect you must give respect,” said Mayweather, who then called McGregor a “faggot” on stage.

McGregor defended himself against these allegations by claiming that Mayweather was using the controversy in his favor to earn more interest from the African American community in his fight:

“You can be fooled by [Mayweather] if you want to be fooled by him. You know the man’s character and his history. He’s trying to sway people in his favor and it’s a cheap move,” McGregor said.

“I was trying to address something in my own little way but whatever, if he feels it’s disrespectful then he’s an idiot and fuck him as well. It’s a dirty play. I think [the accusation] is ridiculous. I don’t understand it. I know who I am as a person and I think that most realistic people will look at me and know who I am.”

McGregor also accused Mayweather of deliberately taking his words out of context and brought up his unsavory past:

“If I was to label him after any animal, it would be the rat,” McGregor said. “I wouldn’t even label him after the great ape. He is a f*cking rat and a weasel because that’s what a rat and weasel does, tries to manipulate words and create something that’s not there. Ask [Mayweather Promotions CEO Leonard] Ellerbe, ask Floyd Sr. They know. It’s a weak move on his part to even try to instigate something. And something so sensitive.

“But that’s the individual he is. He’s a man that beats his wife in front of his kid. What can I say? All I can say is, I never spoke those things. That’s it.”

Mayweather, on the other hand, had to apologize for his own use of the term “fa*got” during the London leg of the Mayweather vs. McGregor press conference. The 40-year-old insulted the Irishman with the word during a heated exchange in July.