Could Conor McGregor vs. Nate Diaz 3 be Fought in a Boxing Ring? 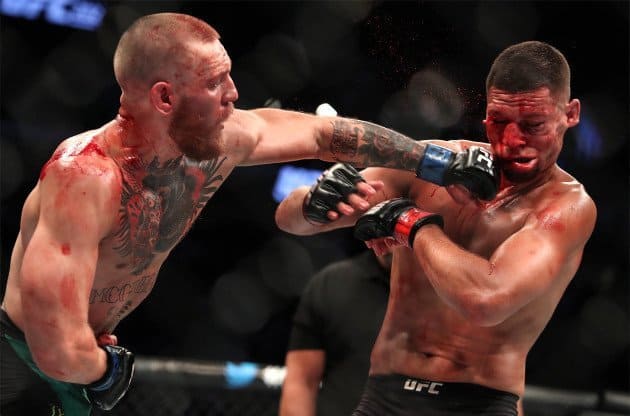 With Nate Diaz set to follow Conor McGregor into a boxing career and the UFC announcing its plans to promote boxing fights in 2018, is a rubber match between both men a possibility?

Well, following the money-spinning spectacle that was Mayweather vs. McGregor, anything is possible.

Diaz has entered a state of semi-retirement since 2016, following two bouts against “The Notorious” which saw his stock hit superstar levels. The general consensus seems to be with the Stockton-native staying out of MMA unless he is given the trilogy fight against the UFC lightweight champion. Yet, with the 32-year-old’s tweet suggesting that he may jump from the Octagon to the squared circle, some are beginning to speculate that the decider between McGregor and Diaz will be inside the ropes.

Ufc offered me title fight in any weight class Im kool though I'll givem a shot when they do something good
On to the next sport for now ????????

“Ufc offered me title fight in any weight class Im kool though I’ll givem a shot when they do something good – On to the next sport for now,” Diaz wrote to Twitter, adding a pair of boxing gloves at the end of the post.

NSAC executive director Bob Bennett is certainly someone who is excited at the prospect of seeing Diaz inside the ropes:

“I don’t think he’s requested a boxing license to date,” Bennett told Express Sport. “But from what I know of Nate and who he spars with, I believe he may have been a sparring partner at some point in time with Andre Ward […] We would be happy to licence him and we hope that he can fight in our state as well, ‘The Fight Capital of the World.'”

McGregor is currently embroiled in a dispute with the UFC over the agreeable details for both parties to finalize a new deal. According to reports, McGregor is requesting a stake in the company in order to return to the Octagon and this seems to be something that the UFC is not willing to offer their star man. McGregor has been more renowned for his activities outside the cage as of late, with reports in Ireland lining him to a feud with a renowned criminal organization still circulating.

While talks between the 29-year-old and the UFC have seemed to reach an impasse, there have been a number of boxers keen to capitalize on the situation by chasing their own bouts with McGregor. Former sparring partner Paulie Malignaggi (who recently claimed that a fight with the Dubliner was set for April), Kermit Cintron, WBO welterweight champion Jeff Horn and ring legends Oscar De La Hoya and Manny Pacquiao have all challenged McGregor to fights.

De La Hoya, who had publicly castigated the idea of Mayweather vs. McGregor since the fight was announced, also put his hand up for a bout:

While the media have run with the Pacquaio story more than others, it also appears that fight has little chance of happening. UFC President Dana White responded to a question on Saturday night about Pacquiao’s comments in relation to a potential boxing match:

White and the UFC plan to take their interests in boxing to the highest levels and will need to hit the ground running in an ultra-competitive business. In having the biggest name in combat sports on their books, it would not be hard to conceive a situation where they place McGregor as the headline act in their first major event. The Irishman would, naturally, need an opponent so why not make it a fight which attracts the eyes of both MMA and boxing fans at once?

The most appealing candidate from the UFC’s point of view would be Nate Diaz. Why? Well, he is under contract with the promotion, is seeking to move into boxing, is the only man to have ever beaten McGregor in the promotion and would tempt even the most cynical MMA fan to part with their dollars to watch him test his boxing skills against “The Notorious”.

Not a far stretch at all…