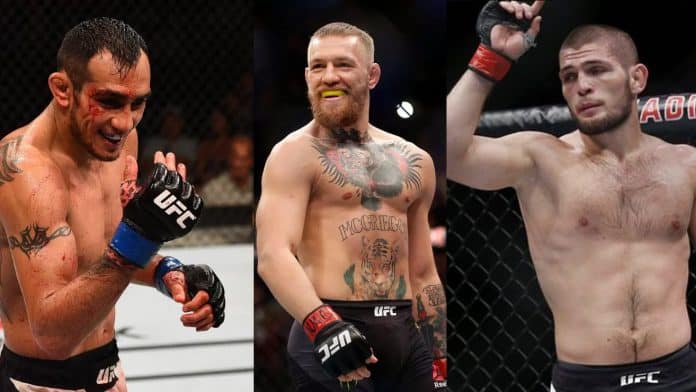 Following months of cagey answers from UFC President Dana White on stripping lightweight champion Conor McGregor, we finally have a clearer answer. White has claimed that “The Notorious” will be relieved on the second title he failed to defend in the promotion, but there is somewhat of an insurance policy in place

White told The LA Times that the UFC will wait until Tony Ferguson and Khabib Nurmagomedov are definitely fighting for the ‘full title,’ providing the fight goes ahead:

“That’s exactly right: As soon as one punch is thrown, it’s on for the full title and it’s only fair. They’ve both worked their way up to No. 1 and No. 2. They deserve a shot,” White said. “This is good news for the fans. I always hear about, ‘What will you do if this guy leaves?’ This is a sport first. People leave, they’ve made money and moved on. It happens.

“Conor does want the belt, he does want to be the champion, but he doesn’t want to defend it. I’d love to see him fight the winner of Ferguson/Khabib next.”

It has been over 14 months since we have seen Conor McGregor inside the Octagon. UFC 205 in November 2016, to be precise, where the mercurial Irishman entered the record books as the first UFC fighter to hold two titles in separate weight classes at the same time. Having knocked out Brazilian legend Jose Aldo at UFC 194 in just 13 seconds to capture the UFC featherweight title, McGregor then pulverized Eddie Alvarez to add the promotion’s lightweight crown to his resume.

“Conor has said that he’s thinking about coming back in September,” UFC President Dana White said earlier this year. “If he comes back in September, that’s almost two years — that can’t happen. It’s not fair to everybody else.

It appears that the decision has now been made to strip McGregor, but only if Ferguson and Nurmagomedov actually make it into the cage. This is the fourth time that this fight has been scheduled, with three previous attempts scuppered on account of injuries. It appears that the UFC is adopting a conservative approach to the matter, given the chance that this fight could blow up in its face again.

The man who McGregor beat to take the lightweight title, Eddie Alvarez, argued that the UFC was wanted assurances that the fight would go ahead before taking the belt off the promotion’s biggest star. Having surpassed the “three-times lucky mark” there is reasonable understanding afforded to the promotion.

Put simply, should both men make it to the Octagon, McGregor’s title will be waiting for the one with his arms held high after Bruce Buffer announces the winner. Having spent well over a year watching the divisional champion’s face be figuratively adorned on the side of milk cartons, it will be a breath of fresh air to many once a new champion is crowned. The big story to come if and when that happens is if McGregor will fancy his chances of winning that title back.

An unlikely but nonetheless possible outcome is if the fight ends in a draw. What happens then?