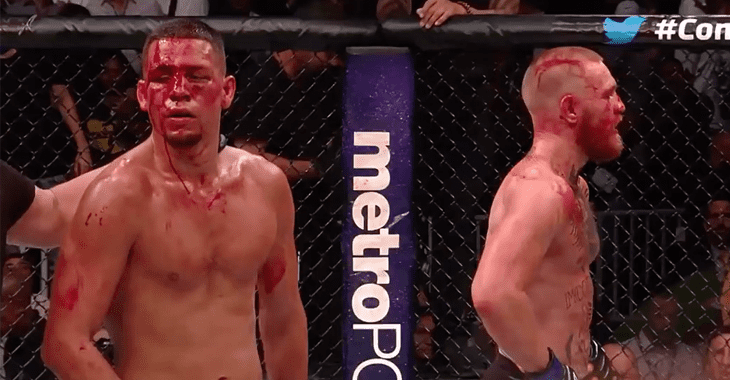 Bisping believes that there may be other reasons behind Dana White’s insistence for”El Cucuy” getting the next shot at McGregor, which goes beyond his interim title.

Tony Ferguson claimed the UFC interim lightweight title by submitting Kevin Lee at UFC 216, edging him closer to the 155-pound’s champion Conor McGregor. The majority of those who watched Ferguson’s performance on Saturday will have found it hard to dispute the streaking lightweight’s claim to a unification bout with the Irishman.

While the UFC was expected to announce McGregor vs. Diaz III as the megastar’s return to the octagon, the promotion’s President, Dana White, signaled that he would favor a bout between McGregor and Ferguson. Why? “It has to happen,” said White.

UFC middleweight champion Michael Bisping took to his Believe You Me podcast to discuss McGregor’s next fight and alluded to politics behind the scenes influencing White’s change of heart, involving excessive monetary demands from Diaz:

“Here’s the thing, Diaz is saying he wants $20 million to fight Conor for the third time, which sounds insane,” Bisping told his audience. “It is insane but realistically, if that was boxing, for an event that size, a fight that big for the PPV numbers, I feel like the boxer would get that money or close to it.

“But 20 million, I think what he’s doing there is pricing himself out of the market, simple as that. That’s why Dana is pushing the Ferguson fight. Dana, by going out there at the press conference and saying publicly that Ferguson has to fight Conor, that takes the momentum away from Diaz so that’s gonna soften his stance on the 20 million.”

Nate Diaz saw his career, popularity and bank balance explode following two bouts with Conor McGregor in 2016. Opting to take a one-year hiatus from the sport in 2017, Diaz is yet to indicate that he will return to action at all.

Given the Stockton native’s propensity for playing hardball, which he has been known to do the past, White may be forced to look elsewhere. Diaz reportedly renegotiated his UFC contract prior to agreeing to a rematch with Conor McGregor last year and Bisping believes that he may be employing similar tactics this time around – with Tony Ferguson now a more than adequate backup plan, Bisping believes Diaz may be shooting himself in the foot:

“If he doesn’t get what he wants he’ll say, ‘F**k it, I’m not fighting then,’ and unfortunately, there is another good fight there with Ferguson vs. McGregor. While it doesn’t have the history of the Diaz-McGregor fight, that’s still a good fight and a lot of people are gonna pay to see that and that is a good backup plan for the UFC and it is the legitimate fight. Especially in the era where people are now talking s**t about all these interim titles, it looks like a good PR move for the UFC as well.”

If Ferguson does get the nod ahead of Diaz, the power he once wielded on behalf of his victory over McGregor would be diminished if the Irishman loses to Ferguson. According to Bisping, there is a great chance that this may happen:

“For sure [Ferguson is a tougher fight than Diaz]. The problem is for Tony Ferguson is that he does get hit. We saw that against Kevin Lee, he had his chin up in the air a few times and Kevin Lee exposed that. Conor, love him or hate him, the guy can fight and he can strike and he can box. We saw that against Mayweather and if Kevin Lee connected with [Ferguson], sure as hell Conor will connect as well.

“The problem that Conor has is the same problem that Kevin has, his gas tank isn’t the best. That’s not me being negative, it’s just that history has shown that. But Tony can weather the storm. Can he weather the storm in the way that Nate Diaz did? Can he take those shots? I guess we’ve got to see the fight to find out but it’s certainly an interesting matchup and you can make a lot of cases for both guys to win.”