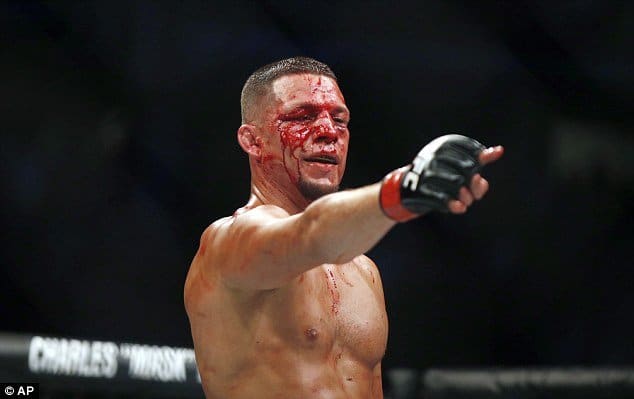 Nate, the younger brother of UFC legend Nick Diaz, is a former World Extreme Cagefighting, Strikeforce, and Pancrase competitor with a Mixed Martial Arts (MMA) record of 30-19-11. Currently standing at #2 in the most UFC submissions behind BJJ master Royce Gracie, Diaz is also regarded for his granite chin and inexhaustible cardio.

With a professional career which has seen its fair share of controversy over its 13 years, here are the Top 5 Most Controversial Nate Diaz Moments. Click NEXT to view the first video…

Diaz was captured on camera brawling with Dagestani lightweight Nurmagomedov amidst a brawl following a World Series of Fighting event in Las Vegas. Diaz and “The Eagle” had been exchanging heated messages over Twitter to each other prior to the skirmish, and clearly were ready to throw down minus the prize money or regulatory rules.

Nate Diaz and Conor McGregor were gearing up for their highly-anticipated rematch following Diaz’s victory months before at UFC 196.

Diaz clearly had enough of McGregor’s antics and proceeded to head towards the exit of the arena holding press-conference, bringing his crew with him.

The Diaz Brawl With KJ Noons & His Father

K.J. Noons had defeated Nick Diaz previously, who asked for a rematch not too politely. Noons didn’t appear too interested in another bout, which prompted Nick to aggressively hit the cage flipping the bird and attempting to intimidate Noons.

Diaz hit the cage to confront Noons after the fight, shooting the double bird, talking trash and coining a phrase that would go down in the annals. Not just a catchphrase—a bonafide Internet meme was born that night when Diaz uttered these immortal words.

Enter Nate Diaz, who formed a tag-team with his older brother and laying into Diaz’s former opponent and his father, before sustains their taunts and mockery all the way up the ramp at the back of the arena.

OK. So maybe not exactly a hardcore controversy, but this is a moment which will live long in the historical archives of the UFC’s greatest moments.

Moments after defeating UFC superstar and promotional golden boy Conor McGregor, Diaz was approached by Joe Rogan for his thoughts on the fight.

Rogan asked: “Nate Diaz, you just shook up the world. How does that feel?” Diaz’s response? 100% bad-ass: “I’m not surprised, motherf**kers.”

MMA Full Contact
Since 2005 MMAFC has been at the forefront of the mixed martial arts scene. Explore our fighter database, news, stats and deep archive of MMA news. Interested in being part of our team? Get in touch today!
All Posts