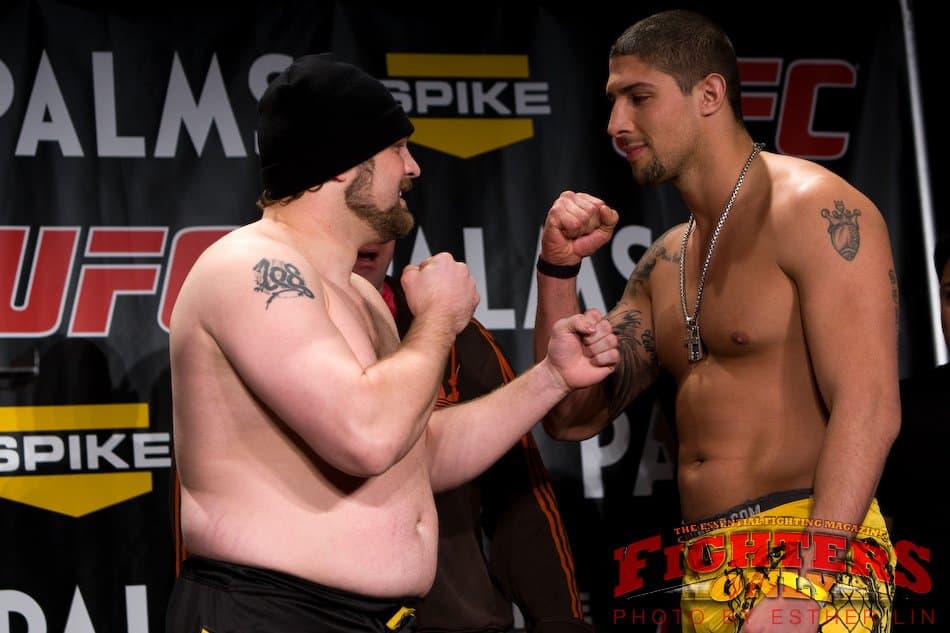 The last episode of the tenth season of The Ultimate Fighter consists of four fights that will ultimately lead to the finale matchup and a chance at a $100,000 contract fighting for the UFC.

Well it doesn’t take long to cut to the chase of what the entire season has been boiling up to. Dana White actually pulls Kimbo Slice aside and asks if he wants to fight. Kimbo, considering his knee injury and that he would be fighting James McSweeney, a strong kickboxer, surprises Dana and the millions watching in turning down the chance to fight.

One thing we know is that Kimbo already has a spot to fight in the December 5th fightcard being televised on Spike TV.

The surprises continue when Scott Junk announces that the doctor informed him that there was two small tears in his retina caused by the eye poke in his fight with Matt Mitrione. Marcus, hearing the news, confronts Matt and “big baby” becomes the angry giant every was waiting to see. Marcus Jones described in great detail how he wants to “choke him into an inch of his life” and “break his arm”. Thankfully his teammates, including coach Rampage Jackson calm the big guy down and shortly after Scott Junk announces his corrective surgery was a success and he can return to fighting in a couple months.

It is time for the first of four fights in tonight’s finale episode of The Ultimate Fighter Season 10. Dana and others express their confidence in Mitrione if he shows up to fight as he is the bigger puncher over the smaller James McSweeney.

As the first round kicks off, the fighters feel each other out for the first minute, and Mitrione shows his speed by connecting on a few light, but quick punches. Halfway through the round, Matt catches a McSweeney kick and connects with a nice punch to his opponent’s jaw. As the shuffle around Matt tries for a knee bar, but James McSweeny manages to take top position and begins to control Mitrione. At this point it doesn’t take long as Matt Mitrione appears to simply wait until the squeeze gets tight enough and decides to tap.

With 1:22 left in the first round, James McSweeney gets the choke over Matt Mitrione.

The attention shifts to the next matchup of Marcus “Big Baby” Jones versus Darrill “Titties” Schoonover. Having played in the NFL for the Tampa Bay Bucs Jones says he literally just woke up one morning and decided he wanted to be a cage fighter because it sounded cool. Darrill on the other hand has a clean MMA record having fought 10 times professionally and 12 as an amateur all victorious. However, Jones is clearly the largest fighter on this season and Schoonover is one of the smallest making it all the more interesting.

We have seen earlier in the episode the bottled rage that Marcus can release with the right motivational factors present. Can he channel this to focus on a victory over the more experienced fighter? Fight number two is underway.

Within 10 seconds of the fight’s kickoff, Marcus grabs Darrill and takes him to the ground with side control. Initiating some ground and pound which does some damage he demonstrates he can dominate Darrill on the ground. After slipping onto his back and then back to Darrill’s full guard he leverages the advantage of his height and manages to connect from that position to his opponent’s face.

With 2:28 left in the first round referee Dean stops the fight as Darrill ceases to defend himself (well because he was asleep). After witnessing the absolute domination, Rashad states that he will now call the big man Marcus “The Darkness” Jones rather than his recent pet name of “Big Baby”. At 36 years of age, The Darkness might have a new career on his hands.

Dana now announces the fights to be Roy Nelson versus James McSweeney and Brendan Schaub versus Marcus Jones. Brendan has continued to be the favorite on the betting lines for winner the competition, so there couldn’t be a better matchup for him to prove he has it. Reiterating Dana White’s comments, Roy Nelson has only impressed himself with his first two fights this season. So fighting against the small, but active James McSweeney should be a s solid matchup as well.

The tenth season can’t come to a close without one last prank by Rampage. This time he transforms the Evans training room into a pink haven full of stuffed teddies and bright pink walls sporting a disco ball and male blow-up doll to boot. As it has come to be expected, Rashad brushes off the childish antics and gets back to business.

James McSweeney prepares for the Roy Nelson fight by meditating to a Team Rashad poetry session (we hoped you watched because we are not about to elaborate on this) as Roy “Cheeseburger in Paradise” Nelson steps into the ring to fight with his morning bed head. Can there be a better intro to a fight to move forward in grabbing a $100,000 contract?

Seconds before the fight kicks off, James McSweeney tweaks his nipple hard – yes that’s right. James’ strategy is obvious from the very beginning and that is to be quicker and dance around the slower Roy Nelson. They exchange jabs during the first minute and a half. Making their way back to the center of the ocatgon after 30 seconds against the cage, they exchange shots that both connect well. Roy Nelson manages to take the top position over James after a takedown. Controlling the wrists, much like he did with Kimbo, Roy attempts to lock in his favorite crucifix. Managing to do so, he renders McSweeney defenseless.

With only 49 seconds left in the first round, the referee has to stop the fight – victory Roy Nelson over the bloodied James McSweeney.

The spats between Rashad Evans and Rampage Jackson continue and his last hope, Marcus Jones is about to step into the octagon against the top contender Brendan Schaub. Brendan clearly has much more well rounded skill, however, Marcus has impressed everyone by being in tune with his size and agility to use it to control the outcome. It is fight time!

No time passes and Marcus has Brendan on his back. Quickly gaining side control, Marcus cocks back the thunder. Marcus takes a minute to compose and jumps into a full mount. However, he is unable to connect with anything as Brendan is able to make his way back to his feet, Shortly after Brendan Schaub connects with a right hand and Marcus falls like a tree. Jumping at the opportunity, literally, Brendan takes top position and continues to land blow after blow to the head of Jones.

At 2:49 remaining in the first round, Brendan Schaub validates his prediction of Marcus Jones falling once he really gets hit hard. Doing just that, Schaub secures the victory and his shot against Roy Nelson for the title of The Ultimate Fighter!