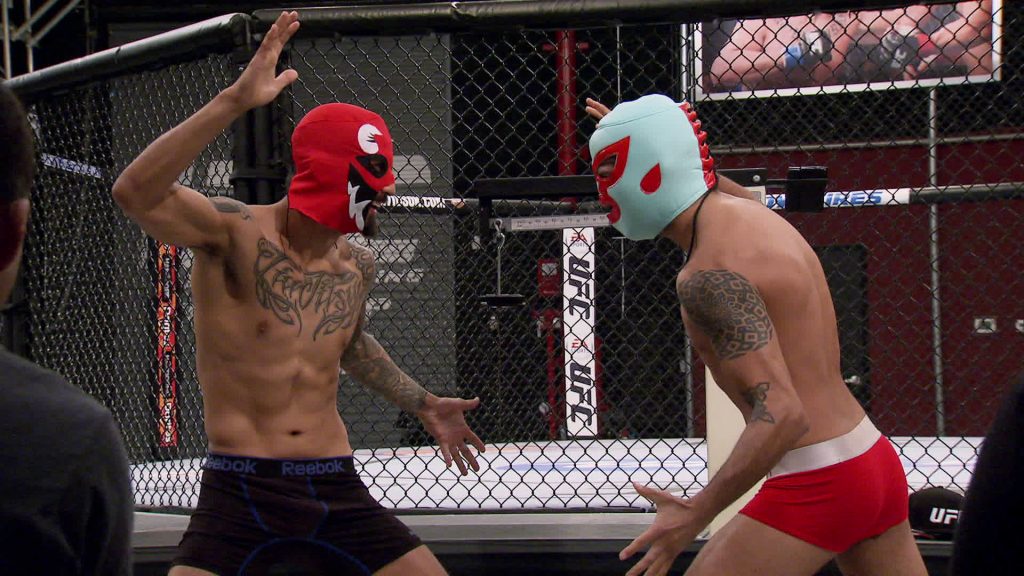 This week is the episode where Rich Franklin takes over for Team Ortiz in the first time a coach has been replaced. Rich Franklin will fight Chuck Liddell this Saturday at UFC 115.

At the beginning of the episode Dana is showing Rich around the newly renovated gym as Franklin was a coach several seasons ago. They meet with the team again and introduce the assistant coaches. Dana tried to stack up the staff with Forrest Griffin, Gray Maynard, and Tyson.

There will be two semi-final fights including Kris McCray versus Josh Bryant and teammates Brad Tavares versus the relentless Court McGee. This season has been packed with top notch fighters and the fair share of injuries to top fighters, but the final fights are strong matchups and should be exciting.

Court and Brad are first up and both are contenders to be The Ultimate Fighter and are now just two fights away from doing so. The fighters feel each other out to begin the round, but it doesn’t take long before the fighters engage. About a minute and a half in and Court comes in and pins Tavares against the cage, ultimately taking him to the ground. This is where Court wants the fight to be and is in control. Tavares isn’t taking any punishment and does manage to get back to his feet.

The fighters have a minor exchange and with less than two minutes remaining Court moves in again and grabs hold of Brad. The fighters are throwing but both are missing. The activity is high, but nothing damaging because no one is really connecting. Another takedown for Court, but the fighters are quickly to their feet again as the round comes to a close.

In round two the fighters aren’t waiting. Quickly they jab and punch trying to open up an opportunity. Quickly though a minute thirty is past and just then Court McGee connects sending Tavares back at least five feet. They fight for control against the cage for a bit and are back at center ring with two minutes plus remaining. A soft kick here and there along with a punch or two and the Brad connects with a strong righthand to McGee’s chin but he doesn’t even blink. A minute left and Brad is increasing his intensity. A couple nice punches, but when trying to land a kick he is caught by McGee and Court manages to push him against the cage, but the round ends there.

Round three will be the test for both fighters to hang it all out and they come out blazing. In the flurry, Brad cracks Court in the sack and we take a breather. The intensity remains as the fighters are back into the action as both know how close they are. Likely an even fight to this point, the fighters exchange punches and kicks. Court seems to be tiring faster than Tavares, but isn’t out by any stretch. Brad breaks away from a clutch from McGee and as they move back around the righ Court McGee catches Tavares and he is visibly hurt. As he recovers Court continues to try and tire Brad and in doing so returns the favor with a kick to the sack. He grazed it at best but Brad takes the opportunity to catch his breath. McGee lands another good punch to the cheek of Tavares , but again during the follow-on exchange and inside kick catches Tavares in the goods.

As they come back McGee gets Bard on the chin again and as he wobbles, takes him down. While on the ground he has hold of Tavares’ neck and before you know it, Brad is non-responsive – lights out.

The coaches work with Kris McCray to improve his technical game in hopes to not get gassed in his rematch against Josh. Yeager runs his mouth once again and when Kacey confronts him to step outside, once again he decides not to enter the ring. Not even worth talking about anymore. He will surely be matched against someone at the finale and lose.

Dana is picking Bryant in this one and we are about to find out how good the President picks ‘em. The fighters know what is at stake and they are both energized. Kris is a bit sloppy as he tries to take Bryant down and takes a few punches because of it. He does get Josh down, but Josh gets to his feet. The cycle happens again and again. Kris seems exhausted from the exchange and Bryant is eyeing up a chance to come in. The fighters have a few good exchanges as they punch, kick, clutch and repeat. With a minute to go they wrap up against the cage and rest. With under thirty seconds to go Bryant lands a serious blow to McCray’s chin. The round ends.

Round two picks up where the fighters left off and McCray once again has Bryant against the cage. As they end up back in the center of the octagon McCray connects with a least six consecutive uppercuts, but Bryant resets grabs a hold of McCray and pins him against the cage. The fighters exchange blows to the head and both are now seemingly tired. Punches are trailing wide and they take another short rest against the octagon wall. Both breathing heavily at this point, however they are both staying very active. With less than a minute remaining they are once again against the cage until McCray pushed Bryant off and connects with a punch to the head. Bryant returns a solid blow and clutches him driving him into the cage until the close of the round.

Round three. The fighters meet in the center, touch gloves and begin to get it on. Both standing tall they trade jabs and punches for the first full minute. McCray ultimately grabs hold and keeps Bryant contained against the cage. Bryant manages to break out with over three minutes but find himself wrapped up again. Both fighters land good shots as the fight progresses which will make it very difficult if it goes to the judges. Down to a minute thirty and if either fighter connects solid the other is surely to fall. They trade monster shots in the center of the octagon, and as the fight closes it could go either way.

Winner McCray with a unanimous decision. Two great fights to wrap up the season. No doubt McGee will take this one, but we will have to wait and see. With McCray well rested – keep in mind he fought five times in six weeks – it might be more of a fight that we give it credit to be. See ya then.